The E3 2011 gaming conference kicks off next week. As we head into the show it’s undeniable that in the battle of the big two, it’s a good time for Microsoft and dark days at Sony.

While Sony has taken hit after hit, most importantly but not limited to their PlayStation Network, Microsoft just continues to grow the popularity of the Xbox360 and Xbox Live. A post on the Microsoft blog recently hinted at the direction that the future Xbox will take, and that direction is “entertainment.” They reported that 40% of all the activity on the Xbox 360 is now non-game related. That includes streaming video, music and other personal uses.

But E3 is about gaming, and Microsoft hasn’t lost sight of that focus.

Xbox Live’s director of programming Larry Hryb, who blogs and games under the name “Major
Nelson,” has released some stats on his blog about the Xbox 360 as we head into the biggest gaming conference of the year. They are truly impressive stats, and shows that Sony has a lot of ground to make up, in the States at least.

He also posted this graph, showing the sales of multiple consoles from years 1 to 9. Out of all the consoles, the Xbox 360 and the PS2 are the only ones to record growth in year five. As of year four, PS3 sales have flattened out. Even though it is in decline, the Wii sales are still mighty impressive. 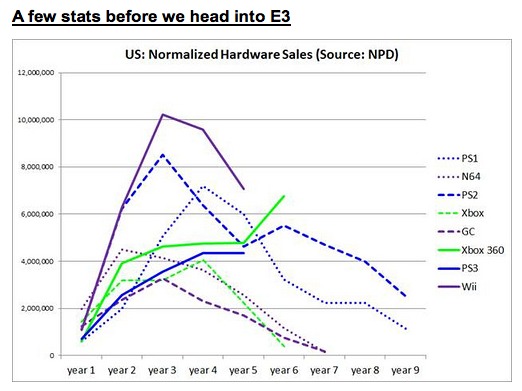