Content that is accessible includes live video streaming of events such as the President’s upcoming State of the Union address scheduled for next Wednesday. Also accessible via the app are the White House blog and briefing room site. 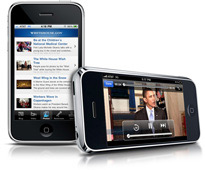 "Mobile internet access is an important way Americans are staying informed. Mobile web usage grew over 100% in the last year in the United States and higher worldwide," writes Dave Cole on the WhiteHouse.gov blog. "As part of President Obama’s commitment to an open and transparent government, the White House App makes getting all the latest news and media from the White House easier than ever. And of course, we’ll continue to look for new and emerging technologies to engage the American people and make information about the President and his administration easily available."

It seems like the White House’s move toward mobile is a bit late, considering the website was changed nearly a year ago, but mobile accessibility is of growing importance to websites in general as more and more people spend less of their Internet time on their PCs and more on their phones.

There is no word from the White House on if they intend to release apps for Android, BlackBerry or other devices.

> The President Dips Into the Google Pool