U.S. sales of video games, which includes portable and console hardware, software and accessories, generated revenues of close to $19.6 billion, an 8 percent decrease over the $21.4 billion generated in 2008, according to The NPD Group.

"December sales broke all industry records and underscores the incredible value consumers find in computer and video games even in a down economy," said Michael D. Gallagher, president and CEO of the Entertainment Software Association, the trade group which represents U.S. computer and video game publishers.

"This is a very strong way to transition into 2010. I anticipate these solid sales numbers to continue upward through 2010 with a pipeline full of highly-anticipated titles." 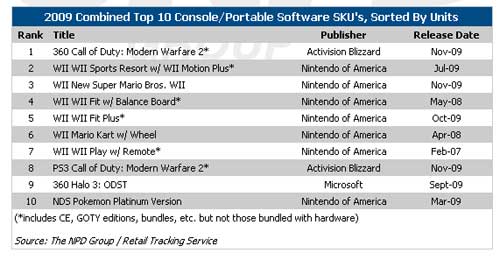 Portable hardware was a bright spot with a 6 percent increase in revenue in 2009, while the remaining video game categories all saw declines, with the largest decrease coming from console hardware (-13%). Consoles software and portable software both saw declines of 10 percent, while video game accessories saw a 1 percent dip.

"In ten years, the industry has changed dramatically in many ways, but most importantly it was grown over those years by more than 250 percent at retail alone.  Considering there are many new sources of revenue including subscriptions and digital distribution, industry growth is even more impressive."

>US Video Game Revenue Down 31%

Gmail and Picasa Storage Can Be Used for Any File