Ah, the continuing drama of a MMORPG. If you’ve ever played (or developed) a MMO game, then you know how it’s a continuing struggle to balance and fix critical problems involving the game. SWTOR isn’t immune to these struggles, showcased by their first major content update – Update 1.1: Rise of the Rakghouls.

Upon looking over their patch notes, it’s a pretty meaty update, fixing a slew of problems and adding in two big pieces of content. I can personally vouch for performance improvement, as the game ran smoother for me after the update, even with anti-aliasing turned on. However, there’s a specific aspect of the game the patch messed with that has left many players raging to the point many are unsubscribing from the game. It involves a little planet called Ilum, where players can go and engage in open world PvP for rewards.

Rewards for fighting other player-controlled characters, what could go wrong? Well, when the game is divided into two exclusive factions (Empire and Republic), and one side has a 3-1 population ratio, many critical problems arise.

Here’s what the game looks like to a republic player on Ilum. For those unfamiliar with the game, the red names represent enemies and green names are your allies. Looks like a barrel of monkeys, right?

The video shows how empire players are simply camping in a republic base waiting for players to re-spawn from death to just kill them over and over. With BioWare’s latest update, the people doing the camping are actually being rewarded for their horde mentality, with “valor” which unlocks access to better equipment.

Obviously this has left many players upset, with many taking to the official forums to vent their frustration. There are so many trying to access the site, that I’ve been looking at this waiting room image for around 15 minutes… 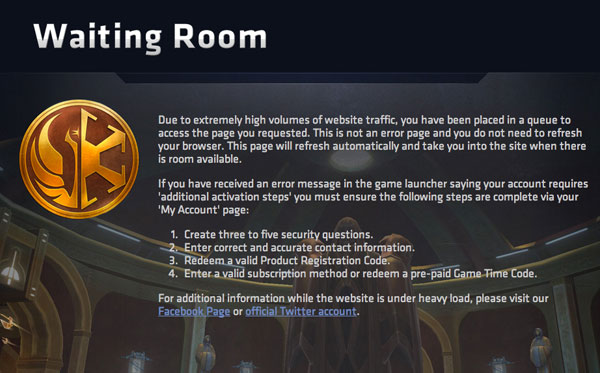 The problem has gotten so severe that they’ve had to switch their forums to “read-only” due to the negative flack they’ve received.

@SWTOR
The Old RepublicThe #SWTOR forums have temporarily been set to read-only mode. We apologize for any inconvenience.

43 minutes ago via TweetDeck · powered by @socialditto

It’s not as though BioWare has ignored the plights of the republic players since the update, as they announced they’ll be taking the servers down today to try and patch the game yet again to fix the problem.

@SWTOR
The Old RepublicAll #SWTOR game servers will be offline from approx 10:15AM CST (4:15PM GMT; 5:15PM CET) for 4 hours for an important patch.

37 minutes ago via TweetDeck · powered by @socialditto

I’m at the end of the article and I still haven’t been able to log on to The Old Republic’s website. If there are any key updates made on the site I’ll update them here later. I’m guessing most of the people on there now are making “rage quitting” threads on the forums, and utilizing A LOT OF CAPITAL LETTERS.

Though I can’t access the site, here’s what various players have tweeted in regards to Ilum…it’s not pretty.

@Darquelaul
Dark LolzIlum is, for me, the most stupid PvP open zone in the MMO history. #SWTOR #WOW

21 minutes ago via TweetDeck · powered by @socialditto

@atheadawn
Will O’Reilly@SWTOR Seriously…. server down for 4 hours because of the stupid Ilum bug? Seriously BW, test your patches before making them official.

42 minutes ago via web · powered by @socialditto

@celticthndrgld
Jessica Cerina Kelly@swtor #swtor Those players who exploited Ilum yesterday and today should have their accounts suspended and valor revoked.

50 minutes ago via web · powered by @socialditto

@TheOneSwanny
Brandon Swann@SWTOR why exactly is the valor in ilum getting nerfed? because people dont like getting camped lol?

55 minutes ago via web · powered by @socialditto

1 day ago via HootSuite · powered by @socialditto