As interesting alternate timelines go, the idea of a cell phone having been built by a different company doesn’t exactly rank up there with JFK surviving his trip to Dallas.  Still, the CEO of Sony Ericsson raised more than a few eyebrows by admitting that his company declined the opportunity to manufacture the Nexus One. 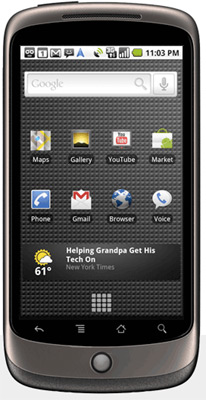 If you speak Swedish, feel free to proceed to Sydsvenskan.se and read Bert Nordberg’s comments for yourself.  We’re stuck with Google’s best attempt at a translation, and it implies that the CEO thought Sony Ericsson didn’t need Google’s help.

"It would be in itself an alternative way out to the market, but we’d rather by their own efforts on the important U.S. market," Nordberg supposedly said.  Meanwhile, the title of the whole Sydsvenskan.se article is translated as "Sony Ericsson refused to build the Google Phone."

This may be a sign that Android doesn’t have quite the appeal many people thought it did; perhaps Google has to convince more corporations of the operating system’s worth before it can even attempt to woo consumers on a large scale.

Or this may simply be a sign of wackiness within Sony Ericsson.  Vladislav Savov, who deserves a hat tip for the whole story, pointed out that HTC has gotten a lot of compliments due to its part in bringing the Nexus One to market, and also that Sony Ericsson recently arranged to lay off 2,000 employees.