On February 20th, 2013, Milwaukee County Deputy Joseph Quiles, with the airport division of the Sheriff’s Office, was working night shift by General Mitchell International Aiport. After making his rounds patrolling, he blew through a stop sign on to Howell Avenue, and t-boned a Camry, sending it spinning and crashing into a tree.

The driver, 25-year-old Tanya Weyker wound up with a broken neck in four places, nearly paralyzing her, and was placed under five separate charges including drunk driving .

“It was a miracle I wasn’t paralyzed.” Weyker told a Milwaukee County Sheriff’s Deputy.

Weyker was injured so badly in the accident that she couldn’t even blow into a breathalyzer or perform sobriety tests.  For over a year, the DWI charges lingered over Weyker, despite blood tests proving she was sober. 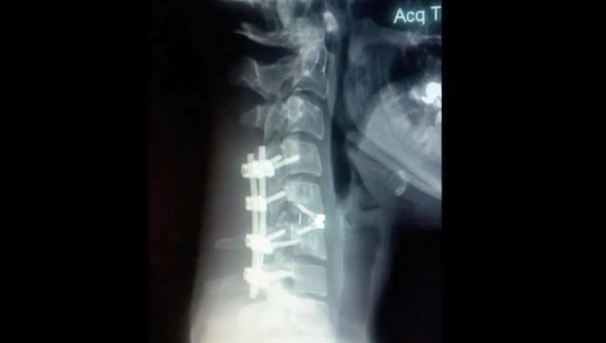 As the ambulance was treating her neck injuries, she was questioned by officers.

“One asked if I had anything to drink that night,” Weyker told WITI, “And I told them a few sips from a friend’s drink.”

In his official police report, Quilles wrote that he had stopped at the stop sign and checked both ways before proceeding, mentioning to a Milwaukee police officer that he didn’t see any coming headlights, despite Wekyer’s Camry having automatic lights.

The report is contradictory to the video via a nearby surveillance camera: Quilles’s squad car turned before making a complete stop.

While at the hospital, blood samples were taken from Weyker by doctors; tests later proved that there was no alcohol in her system. Yet despite this, months passed before the charges against Wyeker were dropped by the district attorney.

Wekyer has filed a complaint against the deputy, which could lead to a lawsuit against the county; she is still waiting for the state to pay her medical bills since the crash.

Quilles is waiting on a permanent duty disability claim.

English Premier League: How Will The Season End?