Nearly a quarter of Americans used Twitter or social networking sites such as Facebook or MySpace in the months leading up to the November, 2010 elections to connect to the campaign or election, according to a new report from the Pew Internet & American Life Project.

In contrast to the 2008 race—in which Democratic voters led the way in their use of online social networks for political purposes—Republican voters and supporters of the “Tea Party” movement caught up with Democrats in their use of social media in 2010. 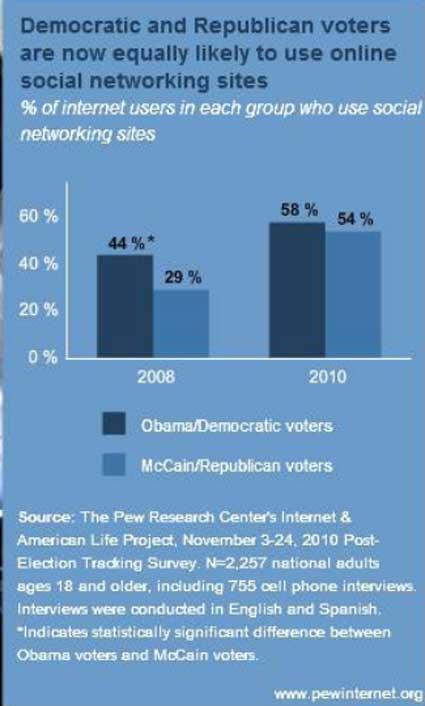 *The “political social media user” group represented by these 22% of internet users voted for Republican congressional candidates over Democratic candidates by a 45%-41% margin.

*Among social networking site users, 40% of Republican voters and 38% of Democratic voters used these sites to get involved politically.

*Tea Party supporters were especially likely to friend a candidate or political group on a social networking site during the 2010 election—22% of such users did this, significantly higher than all other groups.

“The social networking population as a whole has grown larger and demographically more diverse in recent years, and the same is true when it comes to political activity on social networking sites.” said Aaron Smith, a Senior Researcher Specialist at the Pew Research Center’s Internet & American Life Project and author of the report.

“These platforms are now utilized by politically active individuals of all ages and ideologies to get news, connect with others, and offer their thoughts on the issues that are important to them.”

The main reason Americans follow political groups on social networking sites or Twitter is that it helps them feel more personally connected to the candidates or groups they follow-36 percent say this “major” reason they follow these groups or candidates, and an additional 35% say it is a “minor” reason.