Opera has released its new State of the Mobile Web report. In the report, Opera finds that 8:00pm through 12:00am are the peak hours for mobile data consumption.

"Regardless of differences in economy, culture or location, those four evening hours account for a disproportionate amount of mobile data consumption," the company says.

Opera’s report is based on usage of its own Opera Mini browser, which certainly isn’t representative of all mobile usage, but it does have a lot of users, and the stats are worth noting. 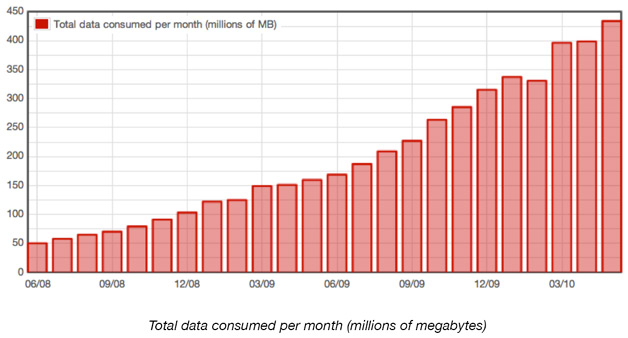 – In May 2010, Opera Mini users generated over 433 million MB of data for operators worldwide. Since April, the data consumed went up by 8.8%. Data in Opera Mini is compressed up to 90%. If this data were uncompressed, Opera Mini users would have viewed over 4.0 petabytes of data in May. Since May 2009, data traffic is up 171.8%.

"Our servers compress more than four petabytes of data each month, and that number shows no signs of slowing," said Jon von Tetzchner, Co-founder, Opera Software. "As more consumers use increasingly vast amounts of mobile data, it looks like we will need more people looking after our servers in the evening hours. The heaviest mobile browsing worldwide occurs between 8 p.m. and midnight, regardless of where people live, their current economic situation, or the availability of broadband."

Some more stats from the report are highlighted here, and the entire report itself can be found here. A significant amount of the report focuses on trends in Latin America.