Propaganda is usually more eloquent, combined with images of gallantry and false promises through meaningless slogans; a rhetoric that allows for no free thought or discussion – ‘you’re either with us or against us.’

North Korea spares no elegance when it tries to make a point, whether it’s a myriad of empty threats, execution by flamethrower, or bombardments from its state-run media front; Pyongyang’s Korean Central News Agency (KCNA), currently threw out some bigoted comments describing President Barack Obama as a “wicked black monkey.”

“Divine punishment to the world’s one and only delinquent Obama”, published in Korean on May 2nd, came just in time with Obama’s state visit to South Korea. The article is composed of essays penned by four different people, despite the style being indistinguishable. If it wasn’t labeled a government publication, it’d pass as satire:

“You can also tell this by his appearance and behavior, and while it may be because he is a crossbreed, one cannot help thinking the more one sees him that he has escaped from a monkey’s body,” it stated.

The written diatribe lists Obama as a monkey four times, as well as calling him a “clown”, “dirty fellow” and somebody who “does not even have the basic appearance of a human being”; it geared towards the United States as “paper tiger” – its strength as a nation being largely a “myth.”

“It would be better for him to live with other monkeys at a wild animal park in Africa … and licking bread crumbs thrown by onlookers,” wrote steel worker Kang Hyok at Chollima Steel Complex, author of one of the four essays.

“These Yankees have no idea who they are dealing with, and we will teach them the true taste of fire and war. Our nuclear strikes of justice and our powerful baptism by fire will decimate America, that devil’s den, without a trace — that is our resolution.” 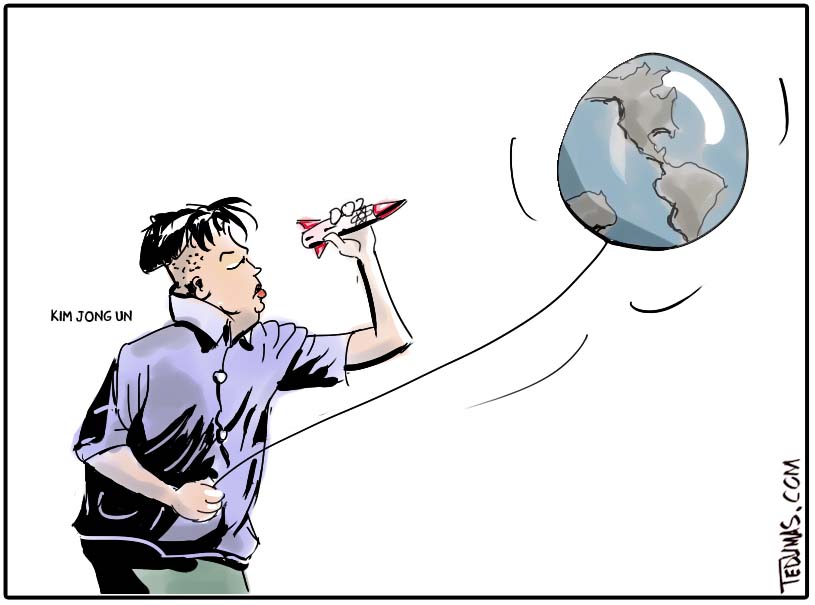 The articles have drawn criticism from the White House’s National Security Council, which said they were “particularly ugly and disrespectful.”

State Department spokeswoman Marie Harf said on Thursday that the North Korean dispatch was “offensive and ridiculous and absurd.”

“I don’t know how many words I can use up here to describe the rhetoric … It’s disgusting,” Harf told reporters at the Foreign Press Center in Washington.

Yoo Ho-yeol, a professor of North Korea studies at Korea University in South Korea said that North Korea is trying to garner attention by publicizing such controversy, and that the government will distance themselves from it, attributing the remarks to their citizens who ultimately penned the piece.

“If it was to publish such a report in the voice of the authorities it would entrap them, whereas reporting the story under some ordinary citizen’s name will give them leeway,” said Yoo.

The published pieces are particularly a response towards President Obama’s recent visit to South Korea, where he and South Korean President Park Geun-hye held a summit in Seoul last month. During his visit, Obama said at a joint news conference with Park that he’s considering further sanctions against North Korea, and that the U.S. will not hesitate to engage in military action to defend its allies.

Beanie Baby Creator: Philanthropy Kept Him Out Of Jail?

Sign Me Up!
Latest Posts
Newsletter
Registration is disabled.