If you follow American Football, you know that it’s playoff time, starting this weekend. Since social media and football go hand in hand quite nicely, Twitter has taken it upon itself to help out fans in keeping up with their favorite teams and players that are involved in the run to the Super Bowl.

Twitter has created a list of Twitter accounts relevant to the playoffs. "You can follow @drewbrees and the @Official_Saints as they try to repeat as World Champions or @MikeVick of the @eagles as he continues his comeback," says Twitter’s Carolyn Penner. "The list also includes folks like @JimIrsay, owner of the @NFLColts, and @PeteCarroll, coach of the @Seahawks."

Users can also receive tweets via SMS on their phones if they don’t have Twitter accounts or smartphones. To do this, you can text "follow [username]" to 40404 (in the U.S.). 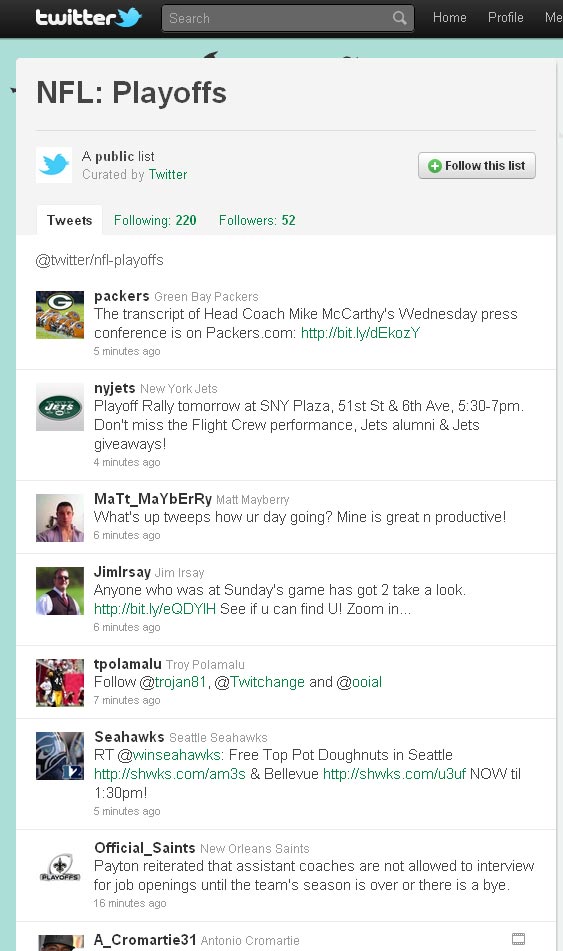 As a football fan, I can honestly say that Twitter has played a valuable role in my keeping up with the happenings of the NFL throughout the season. It’s nice to be able to whip out the phone and quickly see the latest NFL news from a variety of sources – often before the news makes it to ESPN or NFL Network.

It’s also nice to watch what the players themselves have to say, whether they are gearing for a big game, or just hanging out during the bye week. Twitter has put fans closer to the game in ways that just weren’t available in the past.

So, as the playoffs approach, you can bet that fans will have Twitter close by.

Can You Have An Effective Online Presence Without Your Own Site?