Google announced this week that its Google Fiber high-speed Internet service will soon be available in San Francisco apartments and condos.

“Nearly six years ago, we started Google Fiber with the goal of making the web better and faster for everyone,” said Michael Slinger, Director of Business Operations for Google Fiber. “We began in Kansas City and have now committed to bring Fiber to a total of ten metropolitan areas. To date, we’ve focused mostly on building fiber-optic networks from scratch. Now, as Google Fiber grows, we’re looking for more ways to serve cities of different shapes and sizes. That’s why we’re working with Huntsville, AL to tap into the city’s planned municipal fiber network. And that’s why we’re trying something different in our latest Fiber city—San Francisco—where we’ll bring service to some apartments, condos, and affordable housing properties, using existing fiber.” 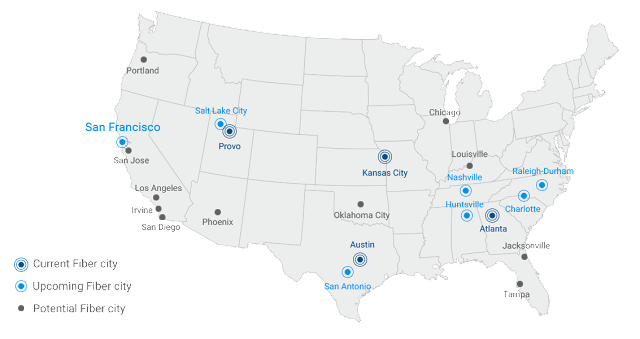 “San Francisco has a long history of creativity, innovation, and development, with its iconic cultural centers, countless startups, and dozens of colleges and universities. In thinking about how best to bring Google Fiber to some residents in this unique city, we considered a number of factors, including the City’s rolling hills, miles of coastline, and historic neighborhoods,” says Slinger. “By using existing fiber to connect some apartments and condos, as we’ve done before, we can bring service to residents more quickly. This approach will allow us to serve a portion of San Francisco, complementing the City’s ongoing efforts to bring abundant, high-speed Internet to the City by the Bay.

Earlier this month, Google announced it would bring its gigabit Internet service to residents in all public housing properties that it connects with Google Fiber. This launched with the Housing Authority of Kansas City at West Bluff. As the company notes, the U.S. has some of the most expensive broadband in the world despite lagging speeds, making it difficult for low income families to get online.

Partnering with the Nonprofit Technology Network, Google will bring the Digital Inclusion Fellowship to San Francisco. You can read about that here.

Deborah Ann Woll May Blur Some Lines in Daredevil: Season 2