Vermont residents may want to start giving a little extra thought to whether or not they like the way Google does things.  It seems that Matt Dunne, the Manager of Community Affairs at Google, is trying to become the state’s governor.

An important note: Dunne hasn’t sworn to turn Vermont into one giant Googleplex.  There’s been no fanatical talk of data collection.  And the words "Google" and "search" don’t even appear on Dunne’s homepage (part of which you can see below). 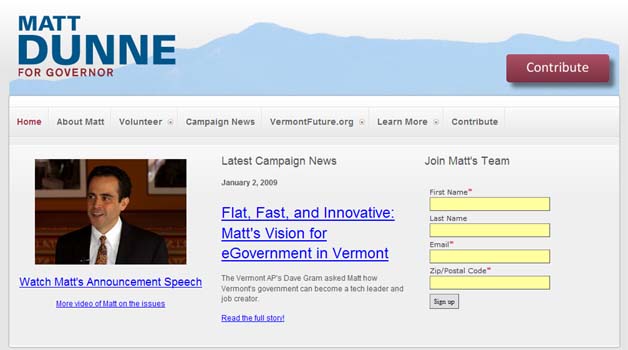 Still, there are some interesting tech connections.  For starters: Dunne’s doing quite well in Google’s search results.  Then there’s the matter of his homepage’s mention of eGovernment, and an option to share stuff on sites ranging from Facebook to Digg to Twitter.

Finally, in an interview with Dave Gram, Dunne talked about bringing fiber-optic Internet connections to every home in Vermont, monitoring energy usage, and following Google’s lead by running "a flat, fast, innovative organization, where people with new ideas to solve problems are celebrated, not shut down."

It’s not at all certain that we’ll get to see what a Googler would do with a state’s government, though.  Dunne’s facing four other Democrats for a chance to go up against the presumed Republican nominee, Lieutenant Governor Brian Dubie.

Will Google Phone Bring Spotify to the US?