This week, Australia got its first female prime minister (Julia Gillard replaced Kevin Rudd following a surprise challenge for the leadership of the Labor Party), and throughout all of the excitement, it seems that Google and perhaps Twitter provided two significant ways for people to keep up with events.

The Official Google Australia Blog might be expected to just focus on the search giant’s role in a given situation.  Instead, Lucinda Barlow, Head of Communications and Public Affairs at Google Australia, gave credit to a couple sources of information and singled out Twitter in a post.

"We’ve been flocking in our millions to online media reports," she stated, "watching press conferences streamed live online, tweeting ferociously (replay the tweet history) – and searching for everything we can find out about this long and remarkable day in Australian politics."

Then, with respect to search, Barlow later specified, "Of the top 100 fastest rising terms in Australia as of 2pm, 90 of them were related to the political situation or to news sites covering the remarkable events."

And below, you can see some examples Google picked out of the long list. 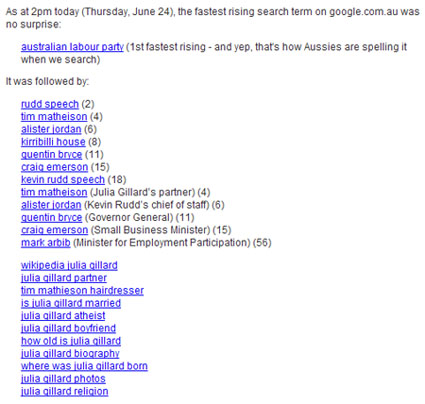 So, while there are obviously more important issues at stake, it may well be that many people will associate Google and Twitter with this historic affair in Australia.