EA Sports said today it has launched a free social soccer game on Facebook to mark the start of the 2010 FIFA World Cup.

The game, EA Sports FIFA Superstars, was developed by Playfish and will be available on additional social networks soon.

"We are leveraging our soccer expertise with the experience of our partners at Playfish to create a casual soccer game for a broader audience," said Matt Bilbey, vice president of soccer, EA Sports. 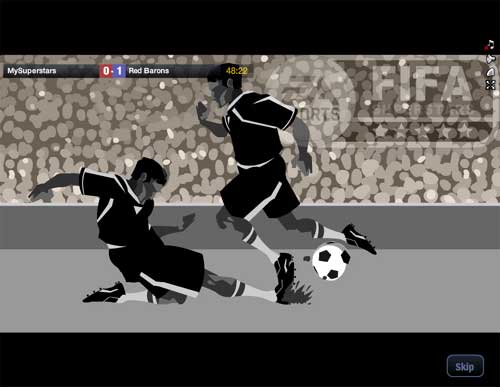 "Soccer fans have a voracious appetite for their sport so we are creating interactive soccer entertainment in new ways and on new platforms to meet the interest," continued Bilbey. "We are excited to broaden our reach from the console that touches our core audience of 10-20 million fans to the hundreds of millions of soccer fans and casual gamers using social networks."

FIFA Superstars will feature EA Sports soccer licenses for 30 leagues, 500 teams and 15,000 players. Users will be able to create a fantasy club side by collecting or trading players, challenging others in competing leagues or searching for leader boards to compete.

Players will also be able to predict the outcomes of games in the 2010 FIFA World Cup to win in-game coins.