The giant upcoming social network for gamers called Call of Duty: Elite will officially kick off the same time as the upcoming COD installment Modern Warfare 3, November 8th. But the service wants feedback from players to help polish off the final product, so they issued an invite for everyone to sign up to be a beta tester on the Elite website.

About two weeks in, more than 2 million have already signed up for the beta. This is a promising number for Elite developers Beachhead Studio and Activision, to say the least.

This figure was announced on Activision’s Dan Amrich’s blog One of Swords. He tells us that the official COD: Elite beta will launch July 14th and users who have signed up should check their inboxes for an official invite.

And they want more beta testers. According to Amrich, the 2 million current signups only represent about 6% of the total Call of Duty world.

The official start of the beta is a month away, so there’s still plenty of time for you to sign up. When the studio head at Beachhead said this would be a live beta, he was not kidding — your participation really can make a difference in how Elite evolves. And don’t be discouraged by the big number, thinking you shouldn’t bother because they already have enough people — two million volunteers among 30 million Call of Duty players is a small amount. More would be even better

It looks like COD: Elite hasn’t been hurt initially by all the talk of it being a “paid service.” A FAQ page was quickly put out on the website to clarify the difference between Elite free and Elite Premium. First and foremost (and this bears repeating) multiplayer will be free.

And most features of Call of Duty Elite will be available through a free membership. Here’s a little chart that details what will be included in the service for free – 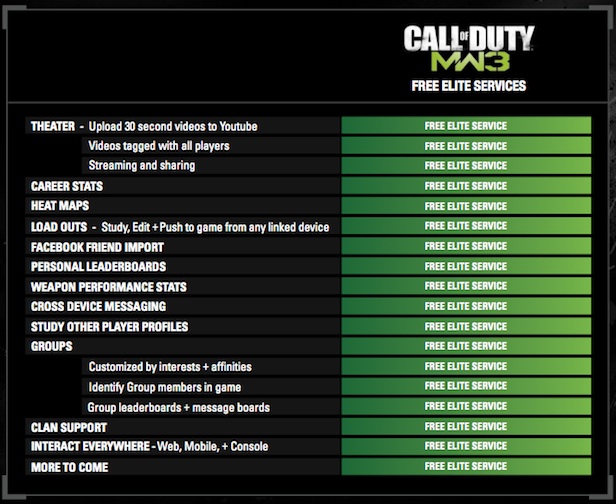 It’s still unknown exactly what the premium membership will look like, and we still don’t have a price yet. Here’s their explanation on why we don’t know any of this yet –

The premium membership of Call of Duty Elite (which is completely optional) will set a new gold standard for what the multiplayer and community experience for a console game can be. Why are we not revealing all of the features that are part of the premium service today? Simple. Because the service was designed to be deeply integrated with Call of Duty: Modern Warfare 3, and will not be demonstrable until we are closer to the launch of the game. We know seeing is believing, and over the next few months we will be revealing and demonstrating more of the premium features and by the end of the summer, we will reveal the entire service in full.

If your little heart can’t wait to obsessively monitor your K/D ratio and accuracy with the scoped Python, Amrich can provide you with a little fix. He’s put up an updated post on everything he knows about COD: Elite.

Compete: Comparing Our Data to Google Analytics is Apples and Oranges