Over the weekend, the music world was hit with the loss of Amy Winehouse. The troubled 27-year-old singer was found dead in her London apartment on Saturday.

Winehouse burst on the scene with her hit “Rehab” and famously battled drug and alcohol addictions throughout her short career. Although an overdose is suspected by many as her cause of death, an official cause has yet to be determined. CBS is reporting that the coroner on the case has ruled that there are no suspicious circumstances in Winehouse’s death.

Of course when any entertainer passes, whether it’s due to tragedy or simply old age, the products of said entertainer see a surge in popularity. When famous movie star dies, we might see increased sales and rentals of their films or we might see book sales skyrocket when an author passes.

Sales of Winehouse’s music have exploded following her death, but one retailer has found itself embroiled in a bit of controversy.

@tweetbox360
Microsoft UK PRRemember Amy Winehouse by downloading the ground-breaking ‘Back to Black’ over at Zune: http://t.co/rWQb0CK?culture=en-gb

Many felt that this was incredibly insensitive and lacking in class, as it clearly looks as though Microsoft is trying to capitalize monetarily on a tragic death.

After receiving tons of tweets in reply such as “Stay classy, Microsoft PR Jackals” and “Talk about cashing in on someones death!” the company issued an apology in the form of two tweets –

@tweetbox360
Microsoft UK PRApologies to everyone if our earlier Amy Winehouse ‘download’ tweet seemed purely commercially motivated. Far from the case, we assure you.

@tweetbox360
Microsoft UK PRWith Amy W’s passing, the world has lost a huge talent. Our thoughts are with Amy’s family and friends at this very sad time.

The question here is this: Does bringing attention to a star’s death in collusion with offering products or merchandise step over the line? Or is it just timely marketing?

Microsoft is definitely not the only company to advertise Amy Winehouse music in the wake of her death. Apple is running and “Remembering Amy” advertisement today and Amazon has a Amy Winehouse 1983-2011 box on both its “Music” and “MP3” pages. This box links to her albums and songs, available through Amazon. 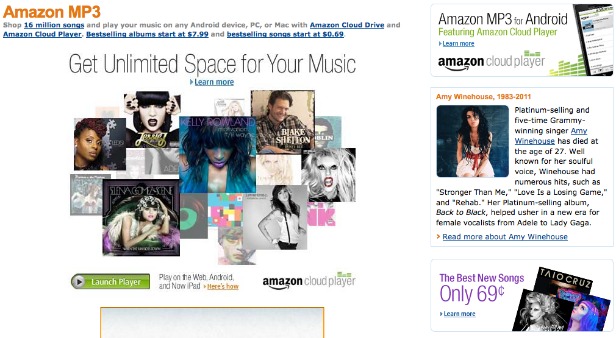 How has Amy Winehouse’s death affected her album sales? Another question might be how well have these promotions worked?

With her death, Winehouse joins music’s most famous club – the 27 club. Other notable musicians that have died at the age of 27 include Kurt Cobain, Jimi Hendrix, Jim Morrison and Janis Joplin.