If and when Goldman Sachs begins selling shares of Facebook, the banking and securities firm is almost guaranteed to have no trouble finding buyers.  Adding to the existing hype, a new report from eMarketer predicts that Facebook’s ad revenue will soar from $1.86 billion in 2010 to $4.05 billion this year.

That works out to a year-over-year increase of about 118 percent, which is rather remarkable.  Facebook’s good fortune isn’t supposed to end there, either, with eMarketer forecasting that its ad revenue will hit $5.74 billion in 2012.

That should be possible in large part due to overseas growth.  As the graph below shows, eMarketer thinks spending there will eventually match U.S. spending, making for a much faster expansion, percentage-wise. 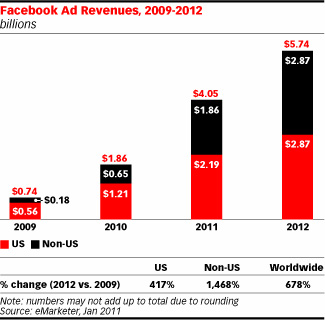 eMarketer principal analyst Debra Aho Williamson even wrote in the report, "If Facebook can continue to increase its global user base and boost the amount of revenue it generates per user, it could even surpass these forecasts."