Ever since the latest update on Facebook allowed users to upload larger images to their wall and photo albums, memes have become more and more popular via the world’s largest social networking site (e.g. What My Friends Think I Do). Another meme has started to blast virally around Facebook, this time involving Facebook’s CEO Mark Zuckerberg and Israeli President Shimon Peres.

The meme involving Zuckerberg and Peres is an image of Peres about to write a statement on a chalkboard with Zuckerberg standing behind him. With this image, users can write whatever they want to display on the chalkboard via the Shimon Peres Says Facebook application. 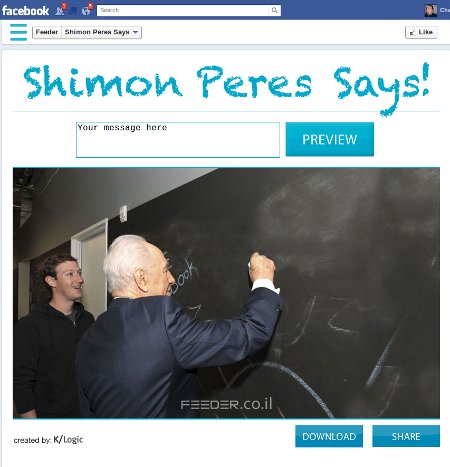 The Zuckerberg/Peres meme is also starting to spread on Twitter as well:

5 hours ago via web ·  Reply ·  Retweet ·  Favorite · powered by @socialditto

Please be sure to save and share your creations from this meme below in this post’s comments section.