Legend has it that St. Patrick performed a miracle by driving all the snakes out of Ireland.  Now, it seems that YouTube’s accomplishing an amazing feat of its own just by functioning.  A director of product management revealed this afternoon that a whopping 24 hours of video are now uploaded to the site every minute.

Hunter Walk (who, we must note, once worked for Conan O’Brien) wrote on the YouTube Blog, "Today, we’re announcing that you’ve done it!  In just 60 quick ticks of the second hand, more than a full, action-packed day in Jack Bauer’s life is now uploaded to YouTube."

Walk then put this fact into perspective by listing a number of other things that occur in 24 hours: "The earth rotates 360 degrees as it orbits the sun," "[t]he second hand on your bedside clock ticks 86,400 times," "[t]he earth’s fastest rocket can reach Saturn," "[t]he most skilled climber reaches Mount Everest’s summit," and "2.5 days go by on Jupiter."

Impressed?  Well, here’s something else to think about: the last time we heard about the rate at which videos are uploaded to YouTube was May of 2009, and at that point, the pace was 20 hours per minute.  So an increase of 20 percent has taken place in less than a year. 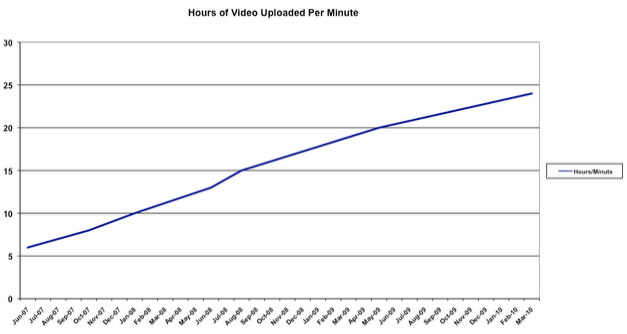 At that rate, we might be hearing how 30 hours’ worth of video is uploaded every minute by St. Patrick’s Day 2011.