Last month, reports came out that YouTube had a "top secret news experiment" in the works, which would involve citizen journalism and "going local in San Francisco." This was played down as simply a version of YouTube Direct.

Now, YouTube has come out and announced that it is indeed participating in an experiment in citizen reporting in the Bay Area. YouTube is teaming up with the local ABC station, ABC7 (KGO-TV) to launch ABC7 uReport. And yes, ABC7 will use YouTube Direct to collect its news footage from people in the region. 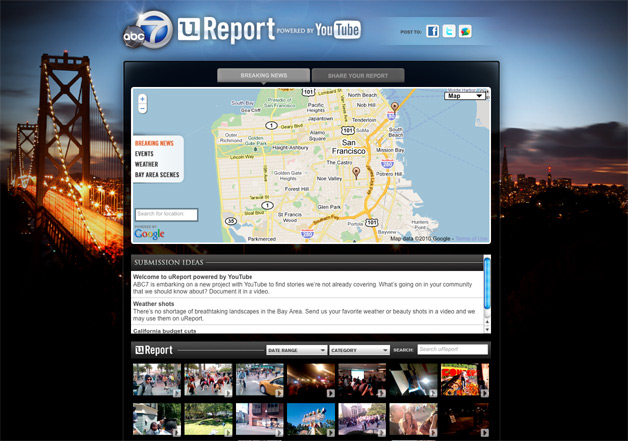 "Though YouTube is a global site, it’s often local videos that are most relevant to your life," says YouTube News Manager Olivia Ma. "When people use camcorders and mobile phones to capture newsworthy events in their neighborhoods and upload them to YouTube, they’re broadening the window into our own communities. For example, in the San Francisco Bay Area (where YouTube is based), we’ve seen several YouTube videos inform local news coverage, from the snapping of support cables on the Bay Bridge, to the shooting of Oscar Grant by an Oakland police officer, to fights breaking out on Muni, the local bus system."

YouTube and ABC7 are encouraging residents of the Bay Area to submit their news videos to the producers via YouTube Direct. ABC7 will then feature the ones deemed newsworthy on TV, their uReport site, and on their YouTube channel.

It will be interesting to see if this experiment is a success and if we will see such partnerships in more cities.

Dell Settles with SEC for $100 Million