Feross Aboukhadijeh, a Facebook intern and student at Stanford, launched YouTube Instant, just after Google rolled out Google Instant. It quickly became a viral hit. If you’re not familiar, read here. We received an email from Aboukhadijeh early this morning.

"Good news!" Aboukhadijeh tells WebProNews. "YouTube Instant hit one million visitors and I will be accepting the job offer at YouTube!"

He also tells us that for the time being, he’ll be keeping YouTube Instant (as opposed to it becoming property of Google).

"YouTube Instant hit one million visitors on Monday, just 10 days since I launched it!" he adds. "The site also has 28,000 Facebook Likes, 20,000 Tweets, and 14,000 Stumbles – quite impressive numbers for only two weeks since launch! (I’ve been busy with the first week of classes at Stanford, so I didn’t announce this until now.)"
"YouTube Instant has been on the homepage of CNN, Fox News, VentureBeat, CNET, Hacker News, All Things D, Engadget, PC Magazine, and WebProNews — of course!" he says. "The site went viral on a scale that I never could have predicted." 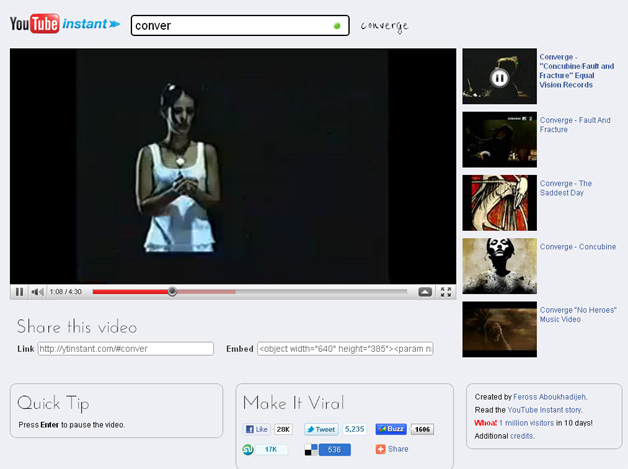 "Also noteworthy: I just updated the site with some awesome new features: autoplay, keyboard controls, shareable URLs, and a sexy new design. And I’m not going to stop there. I’m currently working on adding awesome Facebook integration, on-the-fly playlist creation, and custom auto-updating AdSense units."
YouTube Instant has gotten a lot of exposure all over the world. Only 40% of its traffic is from the United States. Feross talks more about it here.
Share This
Previous Article