Even if the average American doesn’t think about Orkut on a regular basis (or ever), Google demonstrated today that it hasn’t forgotten about the social network.  The option to automatically share YouTube activities with people on Orkut was introduced this morning.

It is interesting to consider what this means for Orkut in other regions, though.  After all, Google introduced a sharing feature involving Facebook, Twitter, and Google Reader a year ago tomorrow, and it’s hard to believe that some sort of engineering challenge delayed the Orkut rollout.

It’s possible, then, that Google’s getting ready to carry out a push to make Orkut more accepted.  Or maybe an engineer just finally remembered he forgot something the first time around. 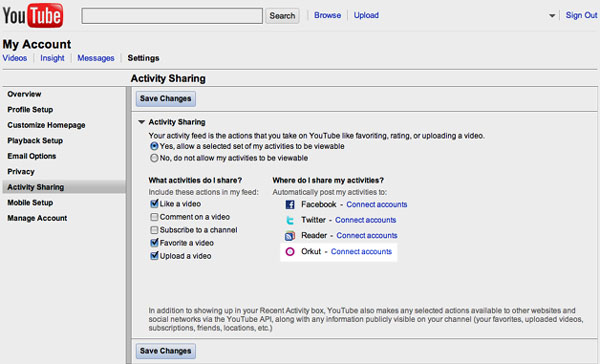 Anyway, with regards to the new sharing feature, a post on the Orkut Blog stated, "Auto-share is an easy way to tell your friends in real-time about the videos you’re liking, saving as favorites or commenting on; the channels you’re subscribing to; or even new videos you’re uploading to your own channel."