Online video usage in the U.S. is up significantly from the same time last year as time spent viewing video on a PC/Mac/laptops from home and work locations increased 45 percent, according to a new report from Nielsen.

The number of unique online video viewers only increased by 3.1% from last January, but the level of activity was up as viewers streamed 28% more video and spent 45% more time watching. Total video streams also saw significant year-over-year growth, up 31.5% to 14.5 billion streams.

January saw new entries to the top 10 most popular video brands  with music and entertainment site VEVO and video rental site Netflix entering at #3 and #9, respectively. Still a relatively new site, VEVO is showing signs of potential with over 32 million unique video viewers during the month, fewer than 100,000 viewers behind Facebook. 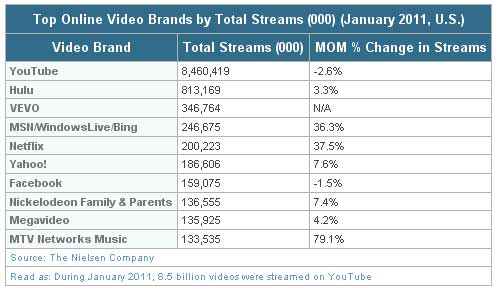 When looking at the most engaging video brands – as measured by time spent – Netflix was the top destination as the average U.S. video viewer spent over 11 hours watching video on the site from home and work locations.

DuckDuckGo Founder Makes the Case For His Search Engine (vs. Google)