Google announced via Twitter this week, that public status updates from Facebook are now included in the search engine’s real-time search feature. That means the largest social network in the world is getting play in Google’s real-time search alongside Twitter, MySpace, and others, and these real-time results are often featured prominently on the first page of search results for the hottest queries.

Apparently only updates from Facebook PAGES are indexed, and according to Danny Sullivan, that includes links, status updates, photos, videos shared by page owners (not comments made by the fans).  Any Facebook update (from regular user profiles) can be shared publicly, so I wonder why these aren’t being pulled. Results from Twitter and other places aren’t only from branded sources.

This seems to indicate that brands should be getting a good amount of play for Facebook appearances in Google’s real-time search results, and possibly in the real-time search results in general (due to Facebook’s huge user-base). Right now, Facebook isn’t dominating the results, but that is bound to change with it being the largest (by far) social network on the web. 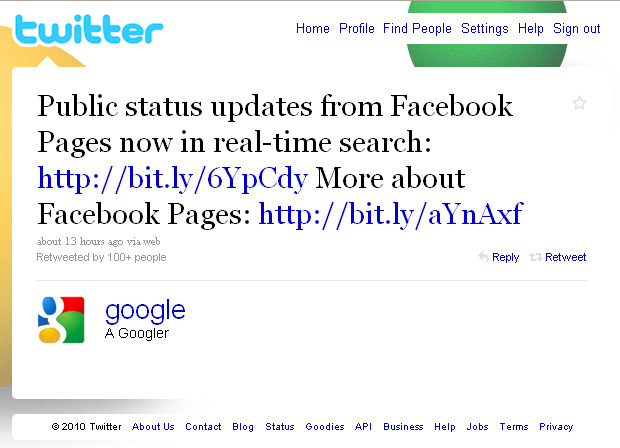 A lot of brands who don’t have Facebook pages in place are likely going to consider this a new reason to create one. Here are some tips for making a good one and promoting it.

This should also lead to Facebook Pages getting more fans, due to the increased exposure. Beware, however, that running a promotion on your Facebook Page may cost you ten thousand dollars, because Facebook’s policy guidelines indicate that you must get written approval from a Facebook account rep. In order to get one of those, you must spend that much in advertising, according to Eric Eldon of Inside Facebook.

Note: At the Online Marketing Summit out in San Diego, WebProNews talked about a different kind of real-time search that involves local businesses, with RateItAll president Lawrence Coburn. It’s not local search as you would traditionally think of it, but it involves location, which one might consider a new kind of query.

Most Businesses Still Only "Experiment" with Social Media