If privacy concerns weren’t enough to get people thinking about deleting their Facebook accounts, they also have security concerns to consider. As Facebook takes over the web, user information goes with it. One can only imagine the potential threats that are lurking around the corner.

An exploit was discovered on Yelp, one of Facebook’s preliminary partners for its Open Graph initiative, which would have allowed malicious sites to harvest user names, email, and data users shared publicly on Facebook, as Jason Kincaid explains. Users wouldn’t have even had to do anything at Yelp beyond visiting the site. 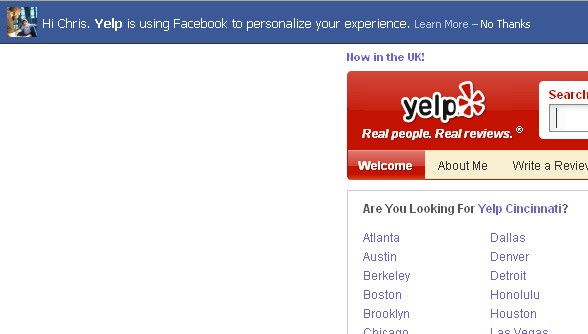 Luckily the exploit has been patched, but as the Open Graph expands, one can’t help but wonder how often these things will happen. Facebook and security issues are not exactly strangers, and cybercriminals will go anywhere they can, and they’re getting more advanced all the time.

As e-commerce gets bigger on Facebook, consumers may find such scares a little unsettling when faced with the option of using their Facebook account to pay for items. Facebook is actually expanding its Offers program now, which lets users earn Credits by shopping.

While there does seem to be a trend lately of people talking about deleting their Facebook profiles, it doesn’t appear that the masses are jumping on board, because there are just too many reasons to stay. For most users, the pros outweigh the cons, and that’s just how Facebook needs it. As Nicholas Carlson notes, users were more concerned about Facebook’s news feed redesign and Beacon, but they still stayed through those.

May 11, 2010
Recent Posts
Registration is disabled.