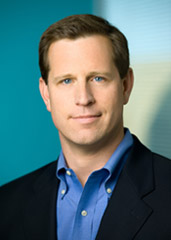 Morse told Brian Womack during an interview, "You’ve seen our track record on M&A with buying really high and selling pretty low.  We’ve got to be careful."  So from now on, when Yahoo considers buying a company, Morse stressed, "It’s got to have a business model, it’s got to fit into our strategy."

And that strategy – or at least the goal it’s supposed to lead to – is an impressive one.  Morse wants to increase his company’s return on invested capital from five percent (which is all it achieved in 2009) to between 18 and 24 percent in 2013.

The changes aren’t going to stop with what Yahoo buys and sells, either.  Its CFO said, "One of the big efforts in the company is to kind of change the culture, create more of a culture of efficiency."

Yahoo’s shareholders appear to appreciate those assurances.  This morning, the company’s stock is up 1.29 percent, while Google and the Dow are up just 0.58 and 0.31 percent, respectively, and Microsoft and the Nasdaq are down.