Yahoo says its been working hard for months to keep BOSS “alive and affordable,” and that it will continue to make it more useful through new features and services.

Rahul Hampole of the Yahoo! Search BOSS product team tells us that BOSS has thousands of publishers serving millions of queries per day, and that compared to the Google Custom Search API, it has more “flexibility, data and monetization” in a single API.

Here’s a comparison of features between version 1 and version 2: 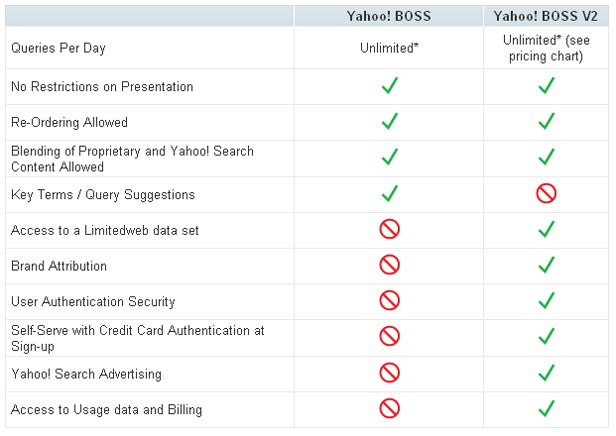 “Users have control over the way they display the search results data and combine it with any other content from around the web,” says Hampole. “In addition, they can apply and use search advertising from Yahoo! to monetize it.”

“To switch from BOSS V1 to BOSS V2, there are minor syntax changes that users will have to follow as listed in the BOSS technical documentation,” notes Hampole. “The BOSS product team worked with a few developers to test the new API and they were able to get their service re-wired in 7-10 days.”

Last month, Yahoo released documentation for BOSS to developers so they could prepare for the new version. More on the pricing and markets here.

Crying YouTube Star Has His Wish Granted To Be Governor [VIDEO]