Yahoo CEO Carol Bartz might want to (yet again) take cover.  A new report is sure to rile her critics and at least a few shareholders, as eMarketer suggested late yesterday that Yahoo’s share of the U.S. search ad market will fall to a measly 8.1 percent this year.

Compared to Yahoo’s 2010 market share of 10.4 percent, that would represent a drop of about one-fifth (or 22.1 percent, to be more exact).  That’s pretty much a catastrophe given the short timespan being discussed.

Things aren’t exactly supposed to bounce back for Yahoo in 2012, either, with eMarketer predicting that the company’s share of the search ad market will hit a new low 6.5 percent.  Which would represent a similar year-over-year loss of 19.8 percent.

Google’s success is mostly to blame for these pessimistic estimates, as you probably guessed.  eMarketer thinks the search giant’s market share will rise from 71.4 percent in 2010 to 75.2 percent in 2011 to 76.6 percent in 2012.

Meanwhile, Microsoft is supposed to see some gains, with its share of the search ad market moving from 10.2 percent to 10.8 percent to 11.1 percent over the same timespan, but that’s not too dramatic. 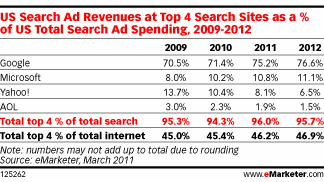 On the bright side for Carol Bartz and Yahoo, either the average investor hasn’t yet seen eMarketer’s report, or he (or she) doesn’t much care.  Yahoo’s stock is up an impressive 3.79 percent so far today following its Search Direct announcement, even though the Dow and the Nasdaq have just risen 0.74 and 1.26 percent, respectively.