At the moment, the Zimbra homepage bears a "BUY ZIMBRA" button and a stamp reading "a Yahoo division."  But according to a new report, a sale of Zimbra (and not just a Zimbra product) may soon take place, making "a VMware division" a more accurate statement.

Kara Swisher wrote earlier today, "Yahoo is close to selling its Zimbra unit to VMware, according to several sources close to the situation. . . .  Sources said the deal will be announced soon, but the price for the open-source email unit was still unclear." 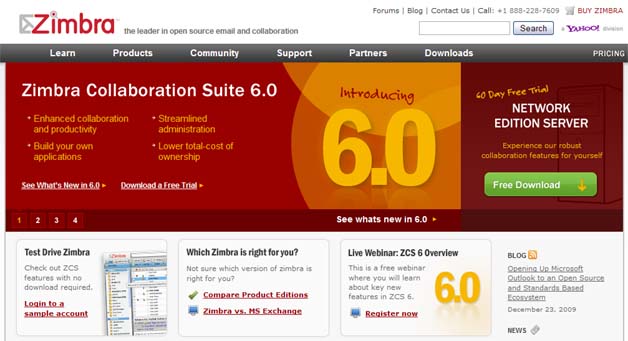 Yahoo bought Zimbra for $350 million towards the end of 2007, so it’ll be interesting to see whether the price has gone up or down since then.  No overly nasty rumors appear to be in circulation now, at least, considering that Yahoo’s stock rose by 1.91 percent today.  (For reference: the Dow and Nasdaq went up 1.50 percent and 1.73 percent, respectively, so this isn’t amazing.)

Anyway, a development along these lines wasn’t unexpected.  Yahoo’s been unloading properties for a while thanks to Carol Bartz’s get-back-to-basics directive, and in October, Zimbra’s former president and CTO also left the company.

> Yahoo May Dispose Of Zimbra

ChaCha Closes $7 Million Round of Funding