IMVironments – the little background themes for Yahoo Messenger – have gotten Yahoo in a lot of trouble.  The company’s lost a patent infringement case that concerns them, and as a result, is supposed to pay a subsidiary of Acacia Research Corporation $12.4 million.

With no offense intended to Yahoo’s lawyers, it’s safe to say that the odds never favored a Yahoo victory; a few details strongly imply that Acacia’s a patent troll.  Take, for example, the fact that the case was tried in the District Court for the Eastern District of Texas – a spot known for favoring plaintiffs.

Acacia’s homepage also says a lot, since ten of the eleven "Recent News" items relate to patents and litigation. 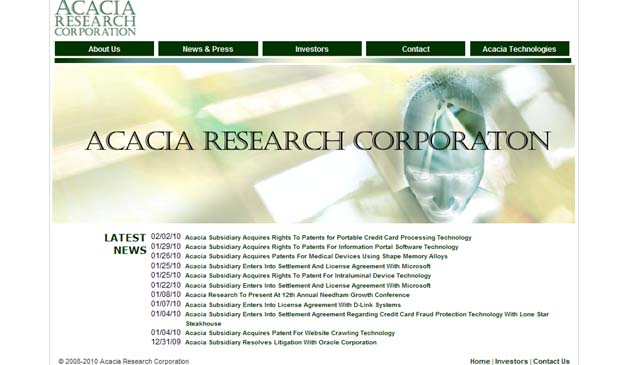 Then here’s one very telling fact that Rachael King recently discovered while researching the company: "Acacia has filed at least 337 patent-related lawsuits in its 18 years."

Anyway, Yahoo now has to fork over $12.4 million, and Acacia should also benefit from an ongoing royalty rate of 23 percent for all Yahoo IMVironments sales.

On the bright side, Yahoo’s stock is up a tiny bit this morning, even as the Dow and Nasdaq are heading down.  Hat tip goes to Robin Wauters.

> Yahoo To Be Default Firefox Search Engine On Ubuntu

Google Introduces Multi-Touch To Nexus One