Even before the iPad was released, Yahoo started catering to potential users, releasing a Yahoo Entertainment app.  It later partnered with Appolicious, too.  Now, Yahoo’s taken a look at what sort of iPad owner audience it’s attracted, and it seems that Yahoo’s done best with wealthy-ish, middle-aged men who take lots of pictures.

Let’s start with the simplest subject: gender distribution.  About 66 percent of iPad users on the Yahoo network are male, compared to 51 percent of regular Yahoo users in the U.S.

Moving on, well, we won’t try to talk you through all the age-related numbers you can see below, but the trend is clear. 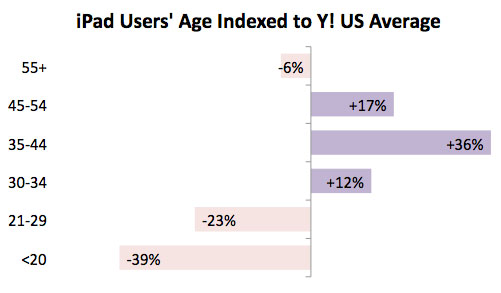 Next, Yahoo considered which specific Yahoo properties iPad owners are visiting, and then measured that against the average.  It found that Flickr is the biggest hit with iPad owners; they’re 2.4 times more likely to visit it.  Yahoo Finance is the next most popular property (with a penetration rate 2.1 times higher), and Yahoo News and Yahoo Sports are third and fourth in line.

Finally, although it’s too early to tell, it looks like the iPad might help Yahoo with people outside the U.S.  The post on the Yahoo Mobile Blog that shared all these other stats also stated, "One surprising data point is the non-U.S. IP traffic on the iPad that’s coming to Yahoo!  During the measurement period, the iPad has only been available for purchase in the U.S. market; however, we observe approximately 10% of IP traffic coming from Europe and Asia Pacific."

Are Forums and Q&A Sites More Important to Search Now?