It’s no secret that Google and Microsoft are in heavy competition in the enterprise application space. This competition may extend into a relatively new sub-category of this space – internal microblogging. Think Twitter, just for within the enterprise.

Now, Google Buzz isn’t exactly a Twitter clone, but you probably don’t have to look too far to see some similarities. Google said right when Buzz was announced that it would be making its way into the corporate environment eventually. "Within a few months, we also plan to make Google Buzz available to businesses and schools using Google Apps, with added features for sharing within your organization," Google Enterprise Product Management Director said at that time.

Microsoft is testing a new product called OfficeTalk, which is much more of a Twitter clone than Buzz (right down to the 140 characters), but would essentially compete with Google’s internal version of Buzz in terms of basic functionality. 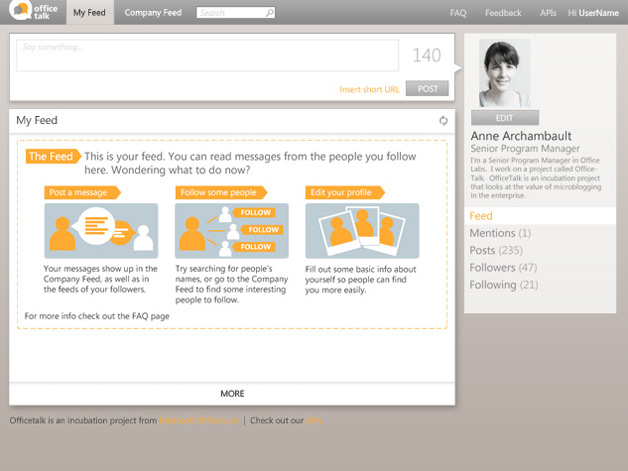 Ever wish you could share information broadly within your organization without emailing everyone? Ever wish you could keep the pulse of what people in your organization think is interesting? Microblogging has that potential. OfficeTalk is a concept test to explore the value of microblogging in the enterprise. OfficeTalk is deployed internally at Microsoft and has seen over 10,000 visitors and hundreds of messages posted daily. We’re now making OfficeTalk available to a few customers in a small pilot test. Because this is an early-stage concept, the OfficeTalk microblogging experience itself looks very similar to other well-known services. The key difference is that the enterprise owns the data since the OfficeTalk server is hosted in the customer’s organization.

While there could certainly be some practical uses for such a service, the idea of a corporate, internal Twitter-like service does not come without its skepticism. "Microsoft is testing a Twitter clone called OfficeTalk, which apparently combines Twitter’s corrosiveness to productivity with all of the stifled boredom your corporate intranet," says Valleywag’s Ryan Tate, for example. "Look, they copied the hashtags, follower counts and everything."

The skepticism isn’t lost on Microsoft’s Office Labs General Manager,  Chris Pratley, however. "What we we’re seeing is that you can make these things, but it’s not automatic that people want to microblog in their organizations," he’s quoted as saying. They’re just testing the product with a handful of businesses for now.

Would your business use an internal Twitter-like service, whether it be Buzz, OfficeTalk, or anything else? Do you see this as a need? Share your thoughts.