With iPhone 5 Release (Possibly) A Month Away, Guy Camps Out At Apple Store

One man (kind of) has the distinction of being the first person to get in line for the upcoming iPhone 5.

In what he calls a “marketing and PR experiment,” Robert Shoesmith is camping outside a London Apple Store until the iPhone 5 is released. Of course, as you know from our extensive coverage, the iPhone 5 has not even been announced yet. Rumors place the release date sometime in either September or October, however.

Shoesmith has set up a blog for what he calls the “iPhone 5 Experiment.” On that blog, he describes what he plans to do for the next month or two (maybe longer).

I will be camping out on the streets of London for the launch of the iPhone 5 in a marketing and pr experiment. There is one rule! I can’t spend any money on anything I take with me. I’m asking for companies to donate products and services to test out whilst I’m there. Can you help?

That’s right, he has left his wallet behind and will be living based solely on what people give him.

And so far he isn’t doing too bad – He has already received packages of lithium batteries from Energizer, a webcam kit from the folks at Skype, and candy from an online distributor. Some of the companies who have already agreed to sponsor the “experiment” – Cadbury, Mountain Dew, Domino’s Pizza, Kenneth Cole, Weight Watchers and Gillette.

He has a Flickr gallery dedicated to all the stuff he’s already received. 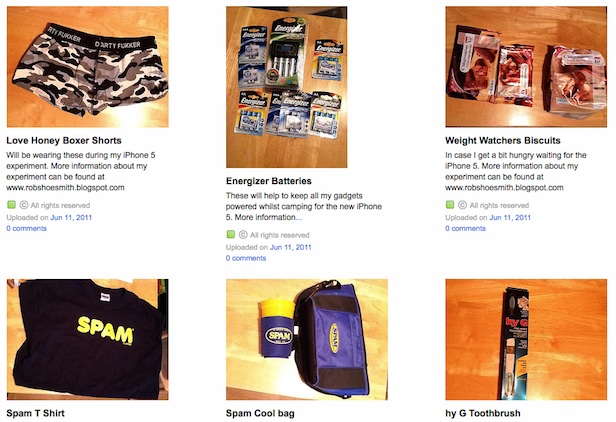 The blog also contains Shoesmith’s wishlist for his camping excursion. This includes items like table cloths, picnic sets, travel sized deodorants, hats, scarves, handheld video game devices and iTunes vouchers. If you help Shoesmith out you get your company listed as a sponsor, blog posting about your contributions and the “strong possibility of a book release after the experiment has been concluded.”

This is a full scale marketing extravaganza, as Shoesmith is also advertising mobile apps that he is playing while patiently waiting for the iPhone 5. He is also schduling entertainment –

During my stay in Covent Garden I’ll have a personal trainer helping to keep me in shape, many products to publicly test, and I’ve even managed to secure a number of live bands to perform. There will be much to see and do, so please make the trip if you can, and don’t forget to bring some friends too!

Do you have a talent? Can you juggle, act, or dance? Can you breathe fire?! Whatever your talent, I’m eager to help you get noticed. As I’m going to be in London for quite some time, it’s important for me to keep the experiment fresh, so I’m actively searching for talented individuals to visit me in Covent Garden and perform.

Call the “iPhone 5 Experiment” what you want, but it is inarguably inventive. A true marketing for marketing’s sake deal where the goal is win-win publicity for all. Plus, for Shoesmith, it’s a chance to score a bunch of cool shit for free. And you can’t fault a guy for that.

Google+ to Be Second Largest Social Network in US Within a Year, Survey Says