Cell phone and wireless laptop Internet use have each grown more widespread over the last year, according to a new report from the Pew Internet & American Life Project.

Nearly half of all adults (47%) go online with a laptop using a Wi-Fi connection or mobile broadband card (up from the 39% who did so as of April 2009) while 40% of adults use the Internet, email or instant messaging on a mobile phone (up from the 32% of Americans who did this in 2009)

The report found the use of application not related to making calls has grown significantly over the last year. Compared with a similar point in 2009, cell phone owners are now more likely to use their mobile phones to: 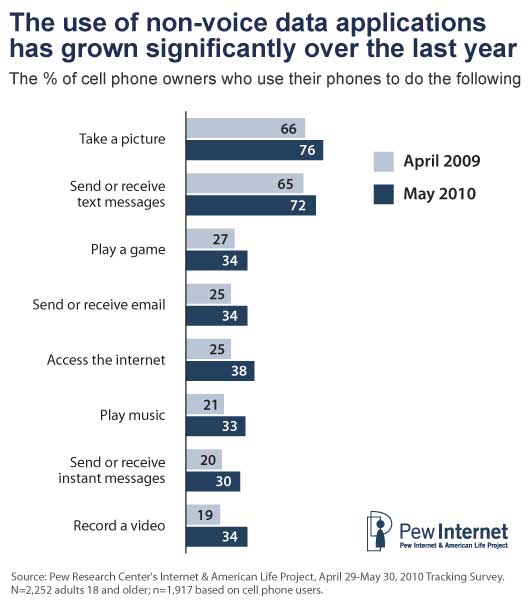 "The growing functionality of mobile phones makes them ever-more powerful devices for on-the-go communications and computing," said Aaron Smith, Research Specialist and the author of the Pew Internet Project report.

"Cell phones have become for many owners an all-purpose chat-text-gaming-photo-sharing media hub that is an essential utility for work and a really fancy toy for fun."

"The mobile user population is becoming more diverse over time and more people are relying on their cell phones as their primary form of wireless connectivity," said Smith.

"Even as laptops have become more commonplace in recent years, significant numbers of young adults and minority Americans are relying on a cell phone as their on-ramp to the mobile web."

*More than half of cell phone Internet users (55%) go online from their mobile phone on a daily basis.

Mozilla Firefox 4 Beta 1 Has Been Released