Call it the little lawsuit that could.

Cameron and Tyler Winklevoss are making a career out of prolonging litigation, as they come out of a recent appeals court ruling unhappy, and with more requests.

As most of you I’m sure are quite familiar with the saga, I’ll keep the synopsis brief.  The Winklevii claim that Facebook founder Mark Zuckerberg ripped of their idea when he created the social media giant.  Although Zuckerberg vehemently denies this claim, the two parties reached a settlement of $20 million in cash and $45 million in stock options.

In January, the Winklevii decided that this was not enough based on undisclosed Facebook valuations and elected to turn down the original agreement to pursue more in compensation.  On April 11th, an appeals court ruled that the original settlement must be enforced, and the Winklevii cannot back out of it.  This seemed like an end to a long litigation process.

Not so fast, say the Winklevii.

The twins are now asking a federal appeals court in San Francisco to rehear their request to nullify the original settlement.  The April 11th ruling was made by a panel of three judges, and now the Winklevii want their motion to be heard by the entire court.

Jerome B. Falk Jr., lead appellate lawyer for the Winklevii said this as quoted in the NYT:

“This appeal is not about whether our clients would be better off keeping the settlement proceeds (which admittedly are substantial) rather than proceeding with their lawsuit against Facebook. That is up to them to decide; it is not a question for the courts.”

Tyler Winklevoss, the tweetiest of the twins tweeted about the new request:

22 hours ago via web · powered by @socialditto

Note the exotic hashtag he created.  Further inspection reveals that only one other person has jumped on board that hashtag, with the tweet “LET ME DIE.”  This is not the first excellent use of the hashtag by Tyler Winklevoss.  His #WonderWhoTheHarvardUpperclassemenWere tag didn’t exactly take off. 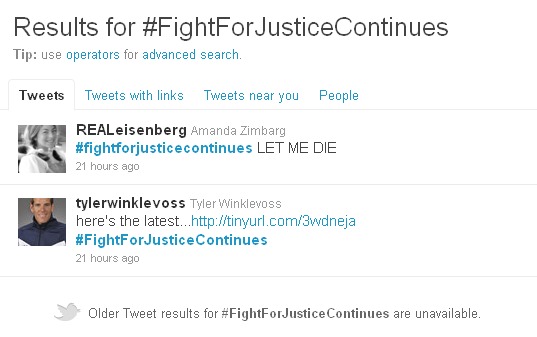 Cameron Winklevoss, who has about 300 less followers than Tyler (Boom! Take that), has not yet tweeted about the continued litigation.

I, for one, sure thought this was over when Mark Zuckerberg demolished the kayaking Winklevii in a Taiwanese animation last week.

GoDaddy Follows Up Elephant-Killing Ordeal with Donations to Haiti Charity