Will the Next Wave of Content Farms Eliminate Humans?

If you’re a regular WebProNews reader, I probably don’t have to tell you that content farms have been in the news a lot lately – mainly Demand Media. While that company uses technology and algorithms to come up with its story assignments, it does utilize a large team of humans to craft the content before it goes out to the masses.

Another company, Narrative Science, is looking at reducing that human factor. "Now this is a content mill," AllThingsD’s Peter Kafka said of the company as it raised $6 million a few days ago. The company is run by Stuart Frankel, a former DoubleClick executive, and one of its investors is former DoubleClick CEO/Twitter Board member David Rosenblatt (what is it with content farms and guys named Rosenblatt?).

Frankel tells WebProNews the Narrative Science is not doing any interviews right now, but "I can confirm, however, that David Rosenblatt and [Demand Media CEO] Richard Rosenblatt, to my knowledge, are not related."

"Frankel and [co-founder] Hammond worked on an earlier incarnation of the idea at Northwestern, where they helped produce Stats Monkey, a program that could automatically create passable sports stories based solely on game data. And StatSheet, a North Carolina start-up, wants to use the same premise to fuel a network of sports sites.

But Narrative Science has ambitions bigger than box scores. The company wants to use structured data sets to produce a wide range of stories.

Here’s how Narrative Science approaches its own description: "We tell the story behind the data. Our technology identifies trends and angles within large data sources and automatically creates compelling copy. We can build upon stories, providing deeper context around particular subjects over time. Every story is generated entirely from scratch and is always unique. Our technology can be applied to a broad range of content categories and we’re branching into new areas every day."

There is some content out there to be judged, but likely nowhere near the amount we will see in the future. Look at the three samples provided at the beginning of this Bloomberg BusinessWeek article, and see if you can tell which one was written by the machine.

From the sound of it, this content is not going to be about saturating the search results like current content farms are doing – at least not yet. In fact, Kafka says much of the content will be behind paywalls. But that’s not to say there isn’t content already out there in the results. A query for "Powered by Narrative Science Inc." (a phrase which appears at the end of the articles) returns nearly 3,000 results at the time of this writing. Not a lot, but it sounds like they’re just getting started, and calling for more partners to publish their content. 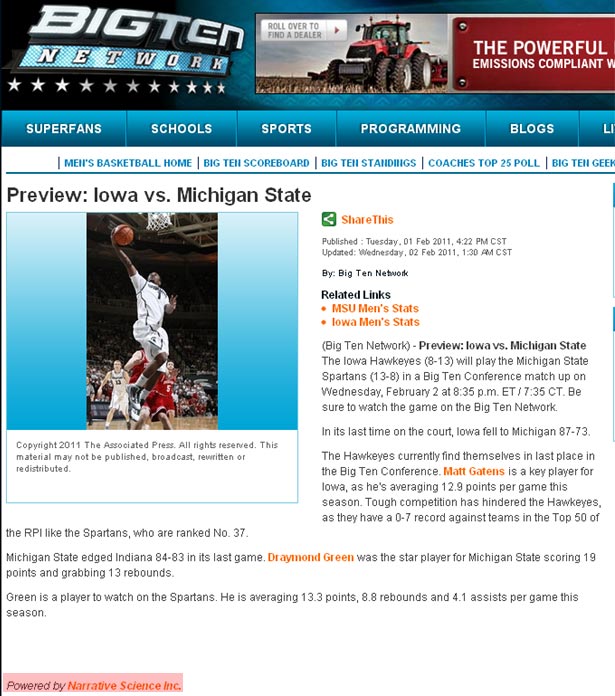 Ross Dawson writes, "Computer writing will get better. For search engines, the issue is not whether content is written by people or machines – it’s whether it is good quality content, in other words useful to searchers. Increasingly computer-written articles will do that."

Even if this company does not flood the search results with manufactured content, who’s to say another entity won’t follow the company’s lead with more of a Demand Media approach minus the humans? Hopefully Google will have its algorithms sorted out by then.

It’s going to be an interesting "narrative" to keep an eye on, and we will certainly be doing that. Frankel did not rule out future interviews.

Do you think computer-generated content will be a good thing for the web? Tell us what you think.

When Will We See Google Music?