Will Social Media Improve Life In the Future?

The social benefits of Internet use will outweigh the negatives over the next decade, according to a new survey conducted by the Pew Research Center’s Internet & American Life Project and the Imagining the Internet Center at Elon University.

While most respondents reported the Internet has both positive and negative effects, 85 percent said it has improved their own social relations and will continue to do so through 2020.

Some 85% agreed with the statement:

"In 2020, when I look at the big picture and consider my personal friendships, marriage and other relationships, I see that the Internet has mostly been a positive force on my social world. And this will only grow more true in the future. " 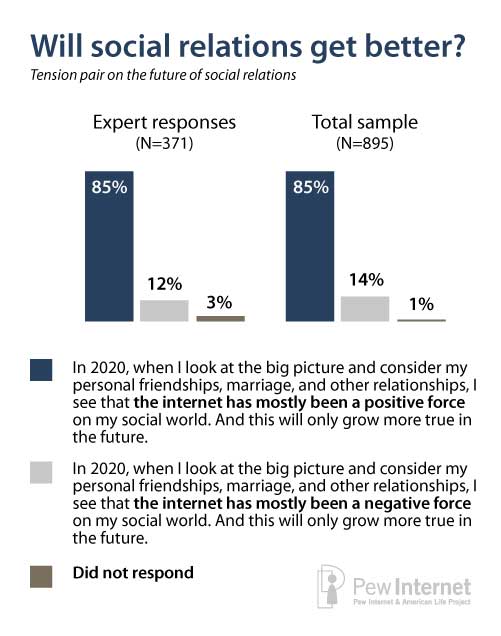 The majority of the people surveyed said the Internet allows people to create and grow bigger social networks than they had been able to have in pre-Internet days. They said they like the advantages offered by the easy sharing of personal details in a one-to-many form that they can control. They said that over the next decade people will continue to invest themselves in building communities via these personal broadcasts.

Some survey participants pointed out that geography is no longer an obstacle and the Internet is also eliminating some or all of the constraints of time and cost when it comes to human connection and sharing.

In addition, some participants said technology will continue to change how we live our lives at home and at work, and that "virtual friends" in more developed social networks will become more common in the future. They said the definitions of "privacy" and "friendship" are changing.

Some 14 percent pointed out the negatives of the connections people are generating online. These included observations that people lose time online that could be spent in face-to-face relationships; social networks can be a distraction; online relationships are not deep and meaningful; the Internet allows people to silo themselves and incite more intolerance.

Here are some responses by those surveyed by Pew:

"The internet has actually helped with human interaction by providing a wider range of ways to communicate such as Twitter and Facebook. These allow some interactions that are better not done face-to-face. And the internet frees up more time for social interaction by making things like shopping faster." William Webb, head of research and development, Ofcom

"Both answers are true. Spending more time online and being more wired to each other via various devices comes at the expense of real-time, deep, meaningful human interaction. But, when you’re really busy and don’t have enough time to see, call or visit with friends it’s nice to use the social networking tools to be better able to keep tabs on or ‘give tabs to’ people in your social network." -Joshua Freeman, director of interactive services, Columbia University Information Technology

Marketing Lessons From The World Cup