Will Google Phone Bring Spotify to the US?

Even if you haven’t used Spotify, there’s a good chance you’ve heard of it. The service’s description goes: "A world of music. Millions of songs on your computer, on your mobile and available offline. Brought to you ad free." 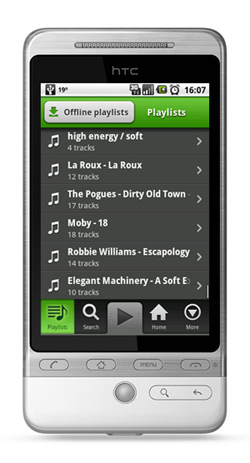 People in the US have been unable to use the service so far. There has been talk that this may soon change upon the launch of Google’s Nexus One phone, but this may not happen. There was rumored to be a US Spotify app for Google’s Android ready just in time for the launch of the phone. Michael Arrington reports:

The two companies sketched out a plan where Spotify’s excellent Android application would be build [sic] into the 2.1 version of Android and would launch in the U.S. with the Google Nexus One phone on January 5. The application – which is available in Europe and allows for offline syncing of songs – would give Google a much-needed competitive answer to Apple’s iTunes. The Android could realistically be seen as a media consumption device, like the iPhone, with things like Spotify built into it.

Google wanted Spotify badly enough that they were willing to cover the label costs for every user of $3 – $4 per month. Spotify would add advertising on top of it, as they do with the free version in Europe, to make additional revenue. Without Google paying those label fees there was no way Spotify could handle the costs of the user flow that 2.1 would provide. Currently, European users must pay for Spotify Premium to use the mobile versions of the service.

Those in the US waiting to get their hands on Spotify may have to wait though. Arrington says his sources indicate that the deal has likely "gone cold," but he says there is a chance Spotify could still be part of Google’s Nexus One announcement, slated for Tuesday, January 5.

Such a deal could mean big things for sales of Android devices and really give the iPhone a run for its money. It’s going to be quite interesting to see how the smartphone competition plays out over the course of 2010. This is only the beginning. Even if a deal is not made, Google is clearly interested in the musical side of mobile, and will likely pursue other options.