Which Smartphones Emit The Most Radiation?

Motorola Droid, BlackBerry Bold 9700, LG Chocolate Touch and HTC Nexus One are pushing the limits of radiofrequency radiation safety limits set by the Federal Communications Commission, according to a new report from the Environmental Working Group (EWG).

The EWG says the ads and good ratings for those smartphones do not reveal they are some of the highest radiation emitters among the phones currently on the market. 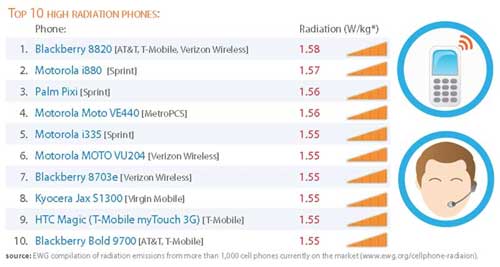 "A number of health agencies around the world advise people to reduce exposures to cell phone radiation, driven by recent studies raising questions about the safety of this radiation, particularly for children," said Jane Houlihan, senior vice president for research at Environmental Working Group.

"That’s why it’s essential for consumers to have radiation output information before they purchase phones for themselves and their families."

EWG has updated its online consumer guide to cell phone radiation, launched last year, to cover the latest mobile devices. The guide contains information on more than 1,000 cell phones and smartphones available in the U.S.