When It Comes To Mobile Gaming, The Freemium Model Pays

In an app store that just hit 15 billion downloads, there is now hard data to suggest that games offered for free actually generate more revenue than paid games. Sound counter-intuitive? It’s not when you think about it in the context of “heavy spenders.

Analytics company Flurry has just come out with some stats that suggest it’s more profitable for mobile game developers to charge nothing for their app. Flurry says that the “freemium” model has well overtaken the “premium” paid model in terms of generated revenue in the last few months.

They looked at the top 100 grossing games in the iPhone App Store from January of 2011 and then again in June. They explain that the term “freemium” simply means any game that is free to download but offers paid items to the subscriber while “premium” means charging anything for your app – whether it be $0.99 or $7.99.

What they found was that 65% of the revenue generated by the U.S. App Store top 100 games were from freemium games. That figure is up from just 39% in January. 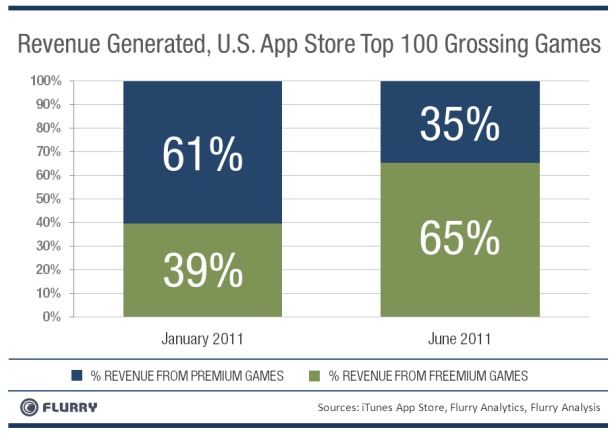 How can this be, you might ask? According to Flurry, it’s all about hooking the heavy spenders. The metric of success (and in turn revenue) for traditional games is with units sold x unit price. That’s not the case with mobile games. For free games, it’s about how many people you can get hooked, who will therefore want to spend money on in-game purchases. This could be virtual currency, virtual goods, expansion packs or other items.

Flurry data shows that the number of people who spend money in a free game ranges from 0.5% to 6% depending on the quality of the game and its core mechanics. Although this means that more than 90% of players will not spend a single penny, it also means that players who love your game spend much more than the $0.99 you were considering charging for the app. And since you gave away the game for free, your “heavy spender” group can be sizable.

Take for instance a random iOS game called Gun Bros. The game itself is free, but the top in-app purchases are “war buck” packages that can run the player anywhere from $1.99 to $99.99.

Will more app developers shift toward the freemium model in the future? With the obvious success and massive opportunities, I don’t see why not.