What Will Egypt Do Without the Internet?

Update 02/02/11: The Internet is back up in Egypt according to numerous reports.

Original: According to numerous reports, the Egyptian government has shut down Internet access for 80,000,000 people. The same goes for SMS communication.

In an action unprecedented in Internet history, the Egyptian government appears to have ordered service providers to shut down all international connections to the Internet. Critical European-Asian fiber-optic routes through Egypt appear to be unaffected for now. But every Egyptian provider, every business, bank, Internet cafe, website, school, embassy, and government office that relied on the big four Egyptian ISPs for their Internet connectivity is now cut off from the rest of the world. Link Egypt, Vodafone/Raya, Telecom Egypt, Etisalat Misr, and all their customers and partners are, for the moment, off the air.

Renesys observed the virtually simultaneous withdrawal of all routes to Egyptian networks in the Internet’s global routing table. Approximately 3,500 individual BGP routes were withdrawn, leaving no valid paths by which the rest of the world could continue to exchange Internet traffic with Egypt’s service providers. Virtually all of Egypt’s Internet addresses are now unreachable, worldwide.

Here’s a small sampling of the Twitter conversation that’s happening. As you can imagine, the tweets are pouring in rapidly. 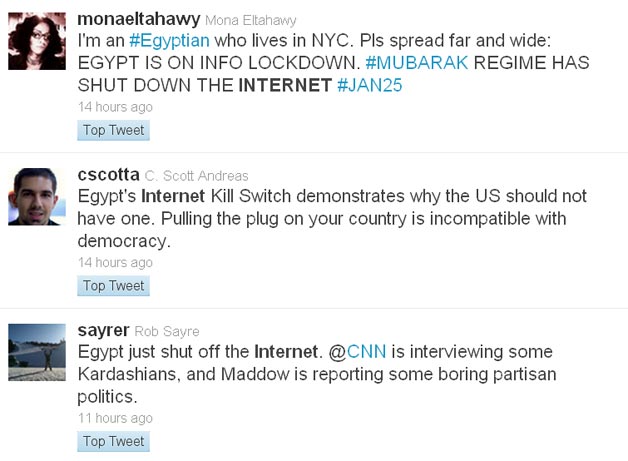 Apart from the obvious suppression of free expression that comes from this story, a huge concern is what it will mean for the Egyptian economy and businesses. As Renesys notes, nothing like this has happened before in the history of the Internet, so it’s hard to speculate on the severity of the ramifications, but there’s no question that they are huge.

Stories will certainly continue to pile up quickly. If you thought Germany’s approach to Google Analytics was questionable, what do you make of this?

A fresh Wired piece shows that the Internet shut-down has done little to curb mass protests, if that was the goal.