Wetpaint Launches Content Network for TV Fans
Wetpaint is launching a new content network of 15 sites, dedicated to popular television shows. "Wetpaint has created a sophisticated prescriptive publishing system that taps into trending data, commentary, tweets, Facebook comments, forum topics to build a network of sites that focus on what we all love best – TV," a spokesperson for Wetpaint tells WebProNews.
"As you know, social media has changed how content is discovered," she adds. "A new network from Wetpaint is launching squarely focused on providing a 360 degree view of each show, powered by technology that brings the 360 view to consumers in real time."
Shows include: "The Vampire Diaries," "Grey’s Anatomy," "America’s Next Top Model," "Castle," "Hellcats," and "Nikita." "Glee," "Dancing With The Stars," Top Chef," "Pretty Little Liar," "Bachelorette," "The Bachelor," "Gossip Girl," "Jersey Shore" and "The Real Housewives of DC." 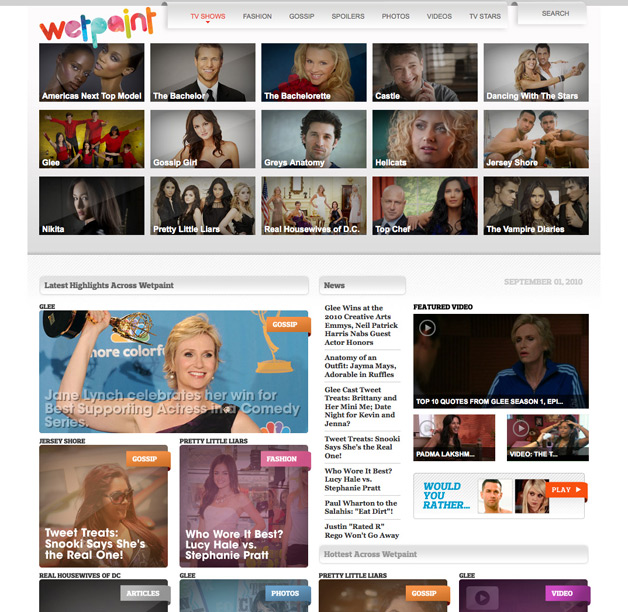 "Wetpaint editors comb the web, social networks, forums and jump on the hottest news for fans – linking photos, the latest videos and gossip to provide one place to find all of the information on their favorite show," the company says. "Additionally the Wetpaint Network includes Facebook pages which enable consumers to keep up on the biggest news – in the pre-launch phase, 400,000 Facebook fans have already joined."

As Wetpaint launches its entertainment network, it is also launching a sweepstakes in which fans can win box sets, and the grand prize – a shopping weekend in NYC.
Share This
Previous Article

Is Google Really As Evil As This Video Suggests?