People have been bitching about the weather since before the age of the internet, but social media has allowed that particular hobby to grow and flourish. The Weather Channel and their weather.com have just launched Weather Channel Social, a platform the gives you real time weather discussion straight from the Twitterverse.

The Weather Channel worked with Twitter and Wiredet’s Trendrr to bring real-time tweets to their website, mobile platforms and TV programming. People can look forward to weather-related tweets showing up on the air, but maybe the most important aspect of the project is the way you can interact on the web.

The Weather Channel Social site allows you to see tweets as they roll in from all across the country. You can check their “featured cities” or click on an interactive map to see the latest from other selected cities. A counter will also show you the cities with the greatest weather-related Twitter activity. 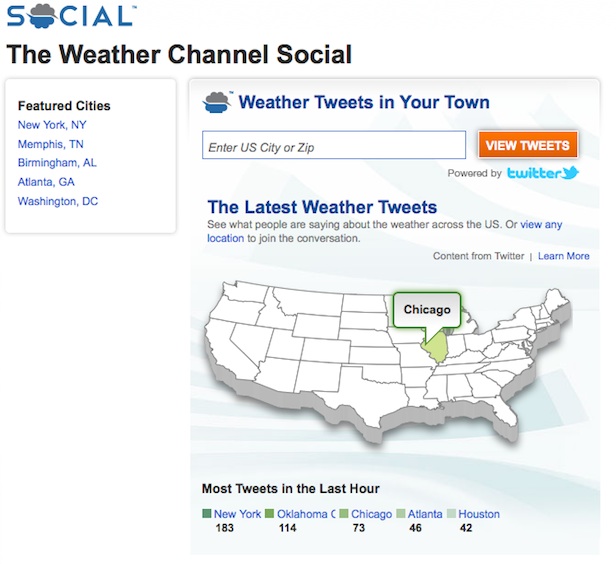 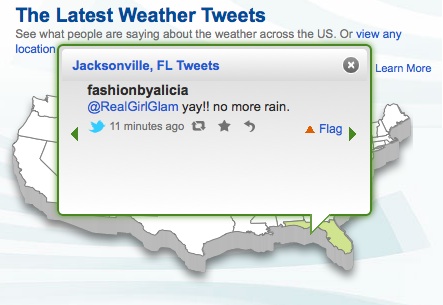 You can also enter your zip code and connect to a Twitter stream from your area. The stream should contain relevant weather tweets from your surrounding areas. 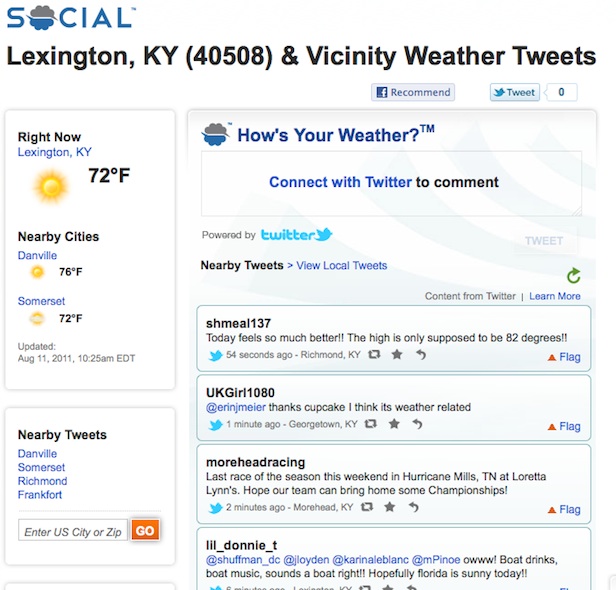 The Trendrr blog highlights the process to develop the algorithm for curating the weather-related tweets. They filter tweets based on three criteria: The classifier, location, and profanity.

The classifier is basically the mechanism that differentiates between weather-related tweets and non-weather related tweets. They give this example –

Consider this tweet: “It’s hot as a frying pan outside!” Hot and outside are two terms that cue us in to a discussion of weather. The same words could be used in a completely different light, however. “I think Kanye & Jay Z’s new album is hot. Can I get an outside opinion?” matches the same query “hot AND outside”, but is inconsequential to TWC.

As you can see from the screencap above, the algorithm isn’t perfect yet – the tweet from @moreheadracing simply mentions the location “Hurricane Mills.” The tweet itself is not about the weather.

They also filter out tweets that contain profanity. That pretty much eliminates every single one of my weather related tweets, which usually follow the template “It’s hot as —-” or “It’s cold as —-.”

The social project is being sponsored by Citibank, so you’ll see Citi adverts as well as a real-time-Twitter-stream box from the Citi account.

According to Twitter, Americans tweet about the weather 200 times per minute. That number jumps to 300-500 on an “active weather day.” If a significant weather event happens, like a tornado or hurricane, Americans can tweets over 2 million weather-tweets in a single day.

By integrating Twitter into their forecasting, The Weather Channel wants everyone to become “weather journalists.” Many say that the amateur journalists on Twitter can’t handle the complicated stories – but I’m sure that everyone can agree that on-the-scene weather reporting is something that the Twitterverse can do extremely well.