We Are Simply a Pawn of The Internet Business Model: Data Collection

The Internet exists to collect your data. We all should realize that everything we do is recorded into huge data sets in order for advertisers to target us better, for online stores to sell us stuff more effectively and for government agencies to know what we are up to. That’s why the Intenet attracts investors and why it is financially viable as a platform. Unfortunately, criminal enterprises are also utilizing our data to steal from us and sell our data to other criminals on the Dark Web.

In a recent Tedx Talk, Eric Jardine, Assistant Professor at Virginia Tech specializing in Internet security and privacy, dived into the difficult issue of privacy and whether the Internet should be anonymous or open to data collectors:

At the core of all of this, is our growing societal problem of online privacy, or really the lack thereof. Currently, through a series of seemingly innocuous choices, we’re barreling towards a world with very little individual privacy. There are tools that currently exist which could catapult us from one end of this spectrum all the way to the other. Technologies such as The Onion Router or Tor are gateways to a portion of the internet known colloquially as the Dark Web.  In this realm we’re anonymous by design and our privacy is pretty much as maximum as we can get.

We don’t want to end up on either of these extremes. Instead, there are discrete practical steps that we can all take as part of our daily lives that would move the needle a little bit and land us somewhere more in the middle.

As we move for more of a digital content platform-centric universe into an Internet of Things reality, we move into a whole other area of interconnectivity. Projections are wild, but one study indicates that by 2025, as many as 75 billion IoT devices could be interconnected into our cars, our homes, even things as silly as our toothbrushes!

Our engagement with all of these platforms and with all of these internet connected devices generate data. That data takes two separate forms. The first is content related information or content related data, some of which could be very personal, such as sexting. it’s obvious why you wouldn’t want companies, government, or random strange individuals getting access to the content of your messages.

The other type of data is what is known as metadata, or essentially data about data. Imagine three data points. First one is a visit to a dating site, the second transaction in this record is a visit to a sexual health website a couple of days later and then following that, maybe a month later, you have a visit to an abortion clinic website. These are three solitary little data points, but already I bet you are starting to infer something about the person who’s visiting these sites and can draw a number of conclusions.

Imagine how many data points you might generate with the searches you do in a day, a week, a month, or a year? Once you leverage Big Data analytics and apply it to all of this information you get a scarily accurate picture of what people are like.

Data is the Internet’s Business Model

If that amount of data that is generated wasn’t bad enough, the entire internet ecosystem, the entire commercial world wide web, is essentially based on a business model that emphasizes the collection, aggregation, sharing and monetization of your user-generated data.

This means that there are a host of actors who have access to the data that we generate as we move through the internet ecosystem. This obviously includes ISP’s, but it also includes the content platforms we engage with on a routine basis, governments who can requisition all of this information, and third-party data brokers. In the United States alone there are upwards of 4,000 discrete data brokers whose whole job it is is to take information about you, aggregate it, and sell it to somebody for some purpose.

We have a privacy problem. We readily engage every day with an ecosystem that’s built around the absence of privacy and the use of our personal data. I think there are important reasons over and beyond just the fact that maybe we want to keep things private some of the time of why privacy remains something important and something to be cherished in society.

We have on one end of the privacy spectrum a problem and with the lack of privacy and on the other hand there is a suite of tools that could catapult us all the way in the other direction, where it’s possible we could become too private for society’s good. These are the tools that are part and parcel of the Dark Web, and the Dark Web is anonymous by design. And of course, there’s a problem with the ways in which humans tend to behave or react when we get total anonymity. As soon as our actions lose consequences we can tend to become unmoored from our moral sensibilities, and that’s problematic for society as a whole and probably for us as individuals as well. The Dark Web does that by design.

It says you do what you want and no one will know who you are, so it doesn’t matter. Researchers from the United Kingdom have done a great job categorizing available Dark Web content and they found a pretty grim picture. For instance, about 15% of available Dark Web content is dedicated to drug sites, 2% is dedicated to what they categorized as child abuse imagery sites.

It’s clear, that this extreme end is very problematic. You’re dealing with a cesspool of crime and that’s not a place I think a lot of us want to go.

So where does that leave us?

If we’ve lopped off the two extremes of that privacy spectrum, where do we want to land? In sort of Goldilocks fashion, we probably want to be somewhere closer to the middle of that. I would like to prioritize privacy when we can but recognize that there are limits. Then the question obviously becomes if that’s where we want to land, and currently, we’re careening towards little privacy, and the tools of Tor and the Dark Web will take us too far in the other direction, how do we get to that happy medium?

Secondly, and I think a bit more problematic pragmatically, we don’t want to just give up on privacy. When you see an entire ecosystem built up around the idea that your data is what turns a buck, it’s hard to fight back against that. Facebook has 2.2 billion users, what am I going to do against that kind of behemoth?

I think within this category, there are tools that we could use to increase our privacy that are well short of Tor and the Dark Web. You could use, for example, a virtual private network or VPN. That’s a small step, but it masks part of your Internet traffic in a way that’s discoverable by law enforcement, yet hidden from Internet service providers or the companies that are trying to build profiles about you. You could also use more private search engines, like Duck Duck Go, that promise to keep your data private, as opposed to Google. 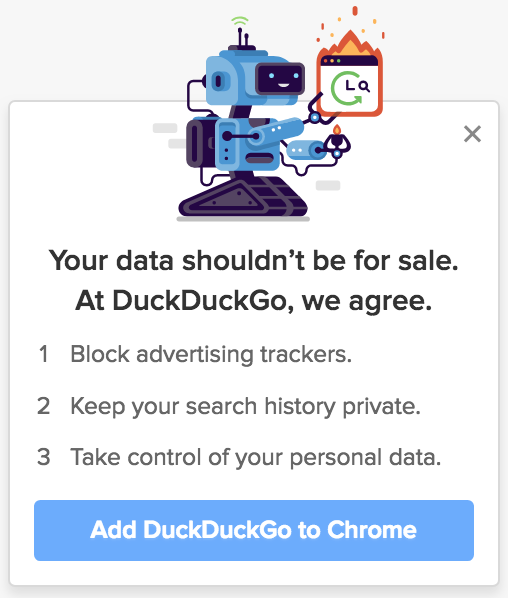 If you ever get asked why you should use DuckDuckGo instead of Google, here’s a definitive answer by @yegg:https://t.co/217OxreS4e

We the People have the Power!

Beyond that, it’s important for us to recognize that individually we may be weak, but collectively we have a tremendous amount of power. We are consumers, and if we work in concert and come to a social consensus that privacy is still valuable, we can pressure the developers of the various services that we use to emphasize privacy.

Lastly, we can pressure our elected representatives and government to try to come to grips with the fact that technology is not going away and that we have a need to deal with the fact that data is going to be collected and data is going to be shared.The questions about how much data to collect, when and how long an entity should keep our data, what kind of rules govern data and who can share the data, is certainly the role of government.