Water for Elephants, Color App Partner Up for Premiere

The new film “Water for Elephants” releases wide next Friday, but excited fans will have the chance to experience the world premiere much sooner.

20th Century Fox has teamed up with the much talked about mobile app Color to provide fans a look into the premiere, both from the perspective of the fans outside as well as the people inside. Photos taken at the premiere, which is Sunday at the Ziegfeld Theatre in New York, will be instantly shared with those in the vicinity in a “Water for Elephants Premiere Group” or “conversation.”

You may ask how this benefits you, if you can’t make it to the NYC premiere on Sunday. Well, the aggregated content from the premiere will be streamed online at the site www.color.com/waterforelephants. Currently, the site asks us to come back Sunday when photos will start streaming at 4:30, when the stars begin to arrive. The site will also have an exclusive clip of the film available at 4 pm EST. 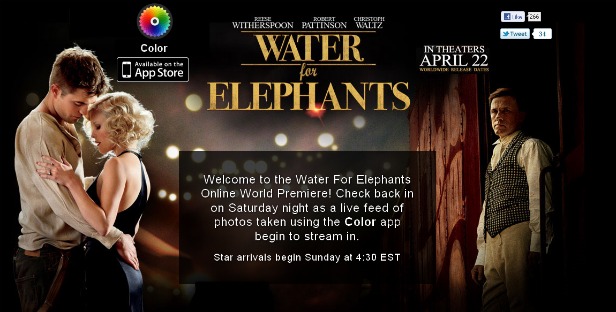 “Water For Elephants” is based on a massively popular novel of the same title by Sara Gruen.  The film stars Reese Witherspoon, Chritoph Waltz (Oooh, That’s a Bingo!) and up from the teeny vampire ranks, Robert Pattinson.

Not only will the shared photos come from fans on the outside, but Fox is having some of the producers and talent from the film take photos using the app, which should show fans the red carpet walk from the perspective of the stars.

“With such a big following of Robert Pattinson and Reese Witherspoon, people will be camping out just to get to the front of the barricades,” Color co-founder Peter Pham tells THR, who likened the app to a “visual Twitter.” “It’ll give you a really good sense of what it’s like from the fan’s perspective. It’s not the high-def professional cameraman taking the photos perched in a specific spot.”

This most likely will not be the last time the entertainment industry calls upon Color or similar apps down the road.  Photo sharing, especially if those streams are broadcast to people at home, could give fans a look at concerts, premieres and award shows from the inside perspective.  And for celebriphiles, the inside perspective is what is most desired.