Watch the Throne: Kanye West and Jay-Z Take Over Twitter

Fans rejoice, as you can now download the much-anticipated album “Watch The Throne,” the collaboration of Kanye West and Jay-Z.

The digital copy was released at midnight and right now, it is available exclusively on iTunes. The physical release is set for August 12th and those who want a deluxe edition in their hands can grab that exclusively at Best Buy. It will hit other retailers on August 23rd.

This method of release has caused a bit of a controversy within the retail world, as record shops and larger retailers everywhere lament the decision to give iTunes and Best Buy “preferential treatment.” They feel like the exclusivity of the release will amount to nothing but “crumbs” being left for them once people buy the album in the opening windows.

And they may be right, as the initial buzz surrounding the album is massive.

Check out this Twitter trends box from just now. Note that along with #ThroneDay, 6 of the other 9 top trends are individual tracks from the album. What an amazing domination of Twitter Mr. West and Jay-Z have pulled off. 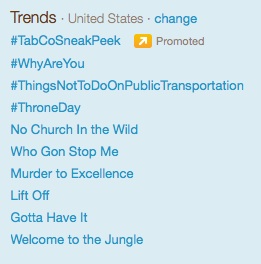 @questlove
Questo of The RootsOMG at “Welcome To The Jungle” #watchthethrone.

8 hours ago via web · powered by @socialditto

22 minutes ago via web · powered by @socialditto

If you want to check out the tracks, here’s a YouTube playlist where you can do that. Here’s a compilation of the tracks, played out in 30 second snippets: