Billionaire Berkshire Hathaway CEO Warren Buffett has made a splash on the internet with a piece published yesterday in the New York Times.

In the op-ed, entitled “Stop Coddling the Super-Rich,” Buffett makes the case that taxes need to be raised on the wealthiest Americans, and that the future of our country economically depends on this action. He writes that the super-rich, himself included, have been “spared” of having to make any real sacrifice:

OUR leaders have asked for “shared sacrifice.” But when they did the asking, they spared me. I checked with my mega-rich friends to learn what pain they were expecting. They, too, were left untouched.

Buffett makes the argument that most of his “mega-rich” friends “wouldn’t mind being told to pay more taxes” if it meant they could help their fellow citizens who are suffering and their country that they love. Buffett’s suggestion is this:

I would leave rates for 99.7 percent of taxpayers unchanged and continue the current 2-percentage-point reduction in the employee contribution to the payroll tax. This cut helps the poor and the middle class, who need every break they can get.

Some of the language he used in the piece is quite direct and has set Twitter ablaze with discussion. His piece is generating so much buzz that he is trending worldwide – as is the phrase “Stop Coddling the Super,” an obvious reference to his op-ed title.

Here’s the only problem, Twitter: the man you’re so fervently discussing isn’t an all-you-can eat food trough. Yes, “Warren Buffet” is trending instead of “Buffett.” Sigh. 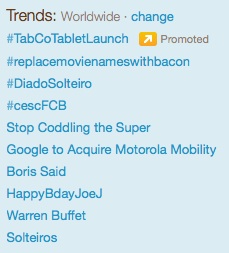 Spelling errors aside, Twitter is a hot spot for economic debate right now – with both sides of the argument being represented. First, the Buffett supporters –

@ChrisContiPhoto
Chris ContiI want to kiss Warren Buffett. And then I want to beg him to run for president. http://t.co/xLL5SE1

3 minutes ago via TweetDeck · powered by @socialditto

@olyphil
Philip HershRight on: A very rich man — Warren Buffett — on why the rich aren’t sharing the burden: http://t.co/jqMx2fe

7 minutes ago via TweetDeck · powered by @socialditto

@jonsenge
Jon SengeWhy our congressional leaders can pack it up and we should hire someone like Warren Buffett to manage our nation’s finances: nyti.ms/r6sbra

11 minutes ago via Twitter for Mac · powered by @socialditto

And the flip side –

@keder
KevinWarren Buffett is insufferable. We don’t have a ‘taxes are too low’ problem, we have a ‘spending is too high’ problem. #tcot #p2

1 minute ago via TweetDeck · powered by @socialditto

41 minutes ago via TweetDeck · powered by @socialditto

What do you think? Let us know in the comments.

Manchester Police Use Social Media To Track Down Rioters