At the Web 2.0 Expo in San Francisco, Huffington Post and Buzzfeed co-founder Jonah Peretti detailed his philosophy on viral content.  After years of testing how and why things to go viral, Peretti decided that the key is “thinking of content and media as an excuse for social action.”

Simply, stuff that has the best opportunity to spread is stuff that people want to share with others.    If this sounds incredibly intuitive, that’s because it is.  The way Peretti highlights this is through differentiating the two internet giants, Google and Facebook.

The world view of Google, he says, is that media is about pure content.  They value access to information such as “How do I get rid of my slice” and “What temperature do I cook a Turkey.”  This is much different from the Facebook world view.  For Facebook, media is a way to show the world who you are – to put yourself out there in a favorable way.  It is “a way to do something with your friends,” says Peretti.  He says that on Facebook, people like to share things that define them.  Sharing a FAIL picture has little informational value to Google, but in the Facebook model, it is something to be shared with friends for a laugh.  Guess which model wins out? 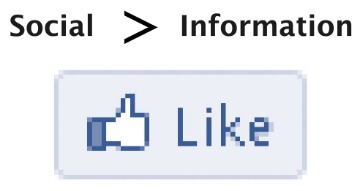 This all makes perfect sense in the context of viral media.  Sharing pictures, videos and interesting stories is very similar to making an iPod mix for your friends.  In both cases, you feel proud to have found the media.  Of course you didn’t create the video or song, but the joy is not in authorship.  The joy is in the sharing. Being able to provide something new to your friends gives you a sense of accomplishment,  as it serves as validation for your tastes.  Josh picks good music.  “Perfect mix for our road trip, Josh!”

The second part of Peretti’s presentation applied his philosophy to the structure of his site, Buzzfeed.  He describes the site as “a hub for viral content and social distribution.”  He explains that site traffic is being shifted these days to “viral lift,” which describes traffic that is generated through content being shared on sites like Facebook and StumbleUpon.  Because of this fact, Buzzfeed groups content into categories like “lol” “wtf” and “win.”

The important conclusion to the presentation details how the “viral lift” strategy is also used with ads.  On Buzzfeed, visitors can makes their own viral pictures using the “add yours” feature and can also add personalized badges to content.  It works the same way with paid content as with editorial content, and sometimes is is so seamless that it is hard to tell a difference.  An example Peretti uses is a trailer for Sarah Palin’s Alaska on TLC.  This type of paid content will be shared by millions of people because it has they ability to generate “social action.”

With this philosophy, its no surprise that something like Rebecca Black blew up the internet.  The social vs. information distinction is something that is probably not lost on the folks at Google, as they just unveiled the new part of their social layer.  See the slides from Peretti’s presentation below.

How To Convert a Facebook Profile Into a Business Page