Mullen and Radian6 have partnered to launch BrandBowl2010, a Twitter/Super Bowl event that combines tweeting, ad reviews and a number of rankings that will allow users to see near real-time ratings of the TV commercials airing during the game. 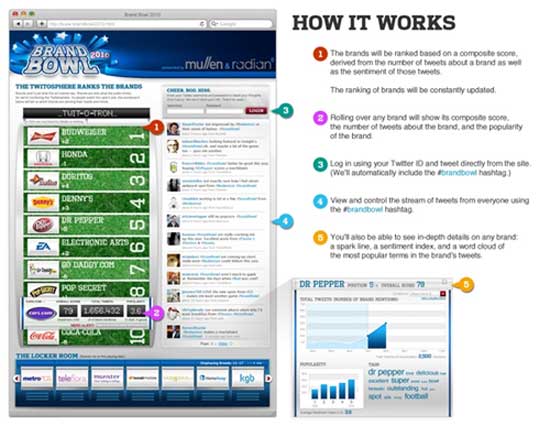 The site will provide an overall ranking of the brands advertising on the game based on a composite score that includes both volume of tweets and positive or negative feedback. The Top 10 most popular brands will be featured on the site, with second tier brands displayed in a sub-section called the Locker Room.

"The ads have always been as big a part of the game as the game itself," said Edward Boches, Mullen’s chief social media officer.

"And with the emergence of social media and platforms like Twitter, everyone wants to talk about them the moment they run. This should be a lot of fun for anyone who loves ads, Twitter and data."

> Go Daddy Back In The News For Super Bowl Ads