Last week, Vevo launched its mobile app for the iPhone and iPod Touch. Today, the company announced that the app has already been downloaded over a million times.

"Our new app for iPhone and iPod touch is a huge success! Since we debuted VEVO Mobile last week, it has ranked #1 among Free Apps and Music Apps in the iTunes store and was named iTunes App of the Week! We’ve also delivered 1 million App downloads – proving fans want to watch their favorite music videos wherever, whenever," Vevo says in a blog post.

The App lets users access over 20,000 videos from over 7,000 artists, and lets them create and save custom playlists for on demand playback, view what videos are being watched in their area, and share videos with friends through Twitter, Facebook and email. 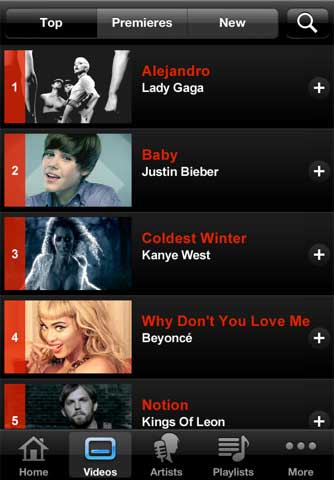 Vevo is giving away a $100 iTunes gift certificate for one person that retweets its announcement.

Upon launch, Vevo said it was also working on an Android app and an iPad app, as well as apps for other mobile platforms. The iPhone/iPod Touch app is currently available in the U.S. and Canada, but will launch in other countries, pending rights agreements.